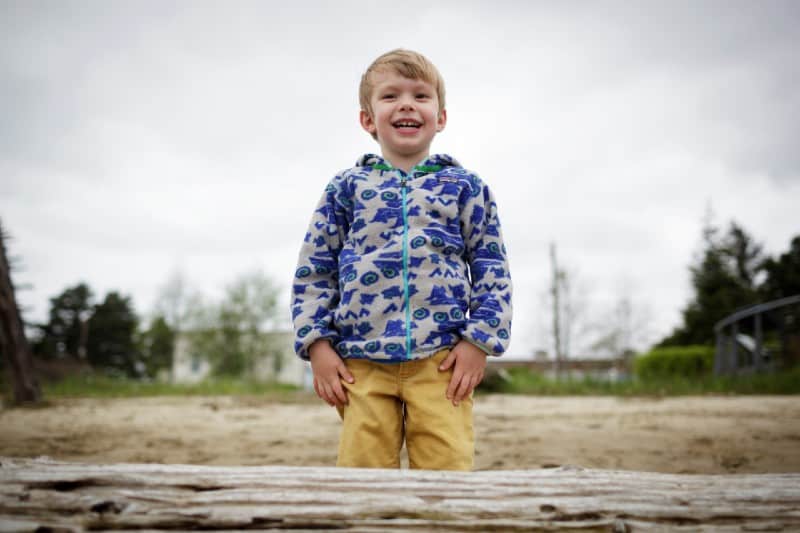 After the pandemic closed Oregon schools this spring, teacher Nicole Odom and her assistants at McKay Elementary in Beaverton depended on parental help to remotely teach their preschoolers.

They prepared video lessons, learning activities, songs and Zoom sessions, all of which required help from parents. Some parents, however, worked outside the home, and only half of the 36 students in Odom’s two half-day classes showed up for Zoom video sessions.

“There were kids we would see or not see on Zoom,” she says. Her team looked for other ways to reach students who didn’t show. But whatever they did required parental help.

“Many parents were dealing with jobs, both remotely or in person, as well as many other significant challenges,” she says.

One of the powers of preschool is to reduce inequalities and prevent an achievement gap between less advantaged children and those with more support. The pandemic, however, is forcing preschoolers to get some or all of their learning at home, where learning opportunities are unequal, says Steven Barnett, co-director of the National Institute for Early Education Research (NIEER) in New Jersey.

“The pandemic has thrown us backwards,” he told reporters in a July webinar organized by the University of Southern California’s Annenberg Center for Health Journalism.

Among the scores of challenges facing schools as they open in a pandemic this fall is how to ensure all children get an equal shot at quality education, no matter their zip code, race or household wealth. State guidelines require schools to make their back-to-school plans through an “equity lens” with heightened attention to disadvantaged students.

COVID-19 already has put children of color and low-income homes at a disadvantage by disproportionately infecting their parents, who are more likely to work in risky jobs such as driving buses, processing food or caring for the elderly, says Colt Gill, director of the Oregon Department of Education.

“That’s another trauma that some children are going through that others are not,” he says.

Eighty-five percent of the parents in the small Yoncalla School District 45 miles south of Eugene want to send their children back to school this fall. District leaders want that too, says Superintendent Brian Berry, but if virus cases continue to climb in Douglas County, it may have to open with distance learning. Oregon Gov. Kate Brown has declared schools must not allow students into classrooms until the statewide positive COVID-19 testing rate is at or below 5 percent for three weeks in a row.

Megan Barber, Yoncalla Elementary’s preschool teacher, is making plans to teach her students in person, possibly in smaller groups. She may wear a mask, keep students distanced, clean thoroughly and take other precautions.

If she must teach them remotely, she’ll face bigger challenges. Low-income parents, a majority in Yoncalla and many Oregon districts, often are single and working outside their homes. They cannot always help teachers provide young children lessons, activities and vital social interaction. Some lack adequate computers and internet connections.

More affluent parents, on the other hand, are more often able to work at home and help teach their children. Some groups of parents this summer already have teamed up to hire tutors who will teach their children in what they’re calling pandemic pods.

A nationwide survey by NIEER shows these home inequities played out among preschoolers last spring. Efforts to serve preschool children were “a disaster,” says Barnett. “No one was prepared.”

The survey of a representative sample of 1,000 parents showed that while most of their 3-to-5 year old children received some remote educational support when schools closed, less than half continued to do so within two months. Of those who did continue, most participated less than once a week in preschool activities.

Darcy Jeffs and Kevin Wolpoff’s son, Miles. Special education students like Miles, who is autistic, are facing additional barriers to learning due to the pandemic.

Darcy Jeffs and Kevin Wolpoff live in Florence on Oregon’s coast, where Darcy can be at home for their son, Miles. But Miles, 6, is autistic and needs services harder to get in a pandemic.

Before COVID-19 arrived, the parents sent Miles to The Child Center, a non-profit in Eugene, for highly specialized therapy six hours a day, five days a week. The pandemic reduced that comprehensive schedule to six hours of distance teletherapy per week. Jeffs received training to help fill the gaps with home strategies.  Still, she says, “Without in-person access to his prescribed schedule, we were experiencing setbacks.”

Now the couple, like most parents, is weighing what to do this fall. They hoped to send Miles to kindergarten with a Child Center therapist, but the public school districts in their area will not allow that. Besides, most plan only distance learning. Miles will return to The Child Center late August, and one private school that plans to physically open might have room for him and his therapist. But these options risk exposing him to the virus.

“There are no easy decisions,” says Jeffs. “We face a health risk on either side. Do we risk exposure or losing access to a very necessary therapy for our son?”

After schools shut down in Drain, a small town near Yoncalla, Jessilyn and Nathan Whiteman received no special education services for their son, Christopher, who has autism spectrum disorder. A private speech therapist in Eugene provided Christopher some service on Zoom. The Whitemans hope Christopher can attend kindergarten in person this fall.

“Christopher is already behind,” says Whiteman, “and we are doing what we can at home. But he needs help from a special education teacher. When his academics are behind it also affects him socially and emotionally.”

Ericka Guynes, principal at Earl Boyles Elementary in Southeast Portland, is concerned her youngest students already have lost ground after the spring closure.

“It is possible they may have lost a year of learning,” Guynes says.

Earl Boyles offers half-day public preschool classes that enroll a total 102 children and, along with Yoncalla Elementary, is a partner in the Children’s Institute’s Early Works program.

Another inequity is inherent in Oregon’s patchwork of early education programs, which have never been open to all children. The state’s public preschool programs and the federal Head Start programs serve less than two thirds of the low-income children who qualify. And private programs have become increasingly out of reach for low- and middle-income families. The state provides child care subsidies for only 15 percent of the low-income families that qualify. Parents pay for 72 percent of all funding for early care and education and thousands of them have lost their jobs because of the pandemic.

COVID-19 has “exposed a fundamental and underlying challenge of the financial mechanism for supporting early childhood education,” says David Mandell, policy and research director for the Oregon Early Learning Division.

So even if Oregon’s preschools are able to open this fall, they will open only for a fraction of the state’s 3- and 4-year-olds. And if those students are taught remotely, the quality of their education will be lower, says Barnett, with learning losses “much deeper in things like language, math and social/emotional development.”  This deficit could have negative effects on children through life, he says.

Early education has a “profound impact on children’s development and their acquisition of social-emotional, language and cognitive skills, all of which are critical to their school and life success,” says an Early Learning Division report to the Oregon Legislature last December.

Oregon state guidelines emphasize schools must keep all students from falling behind whether they are disabled, learning English, homeless, in foster care, living in poverty or with parents who must leave home to work.

“Create learning opportunities that address white privilege and the dismantling of white supremacy,” the state says.

Education leaders say they will work to get more resources and support to the children who need it most. The state, for example, needs to steer emergency federal money for child care support to low-income communities where it always has been scarce, says Mandell. Oregon’s 275,000 children under six comprise its most diverse population sector, with one in four speaking a language other than English at home. 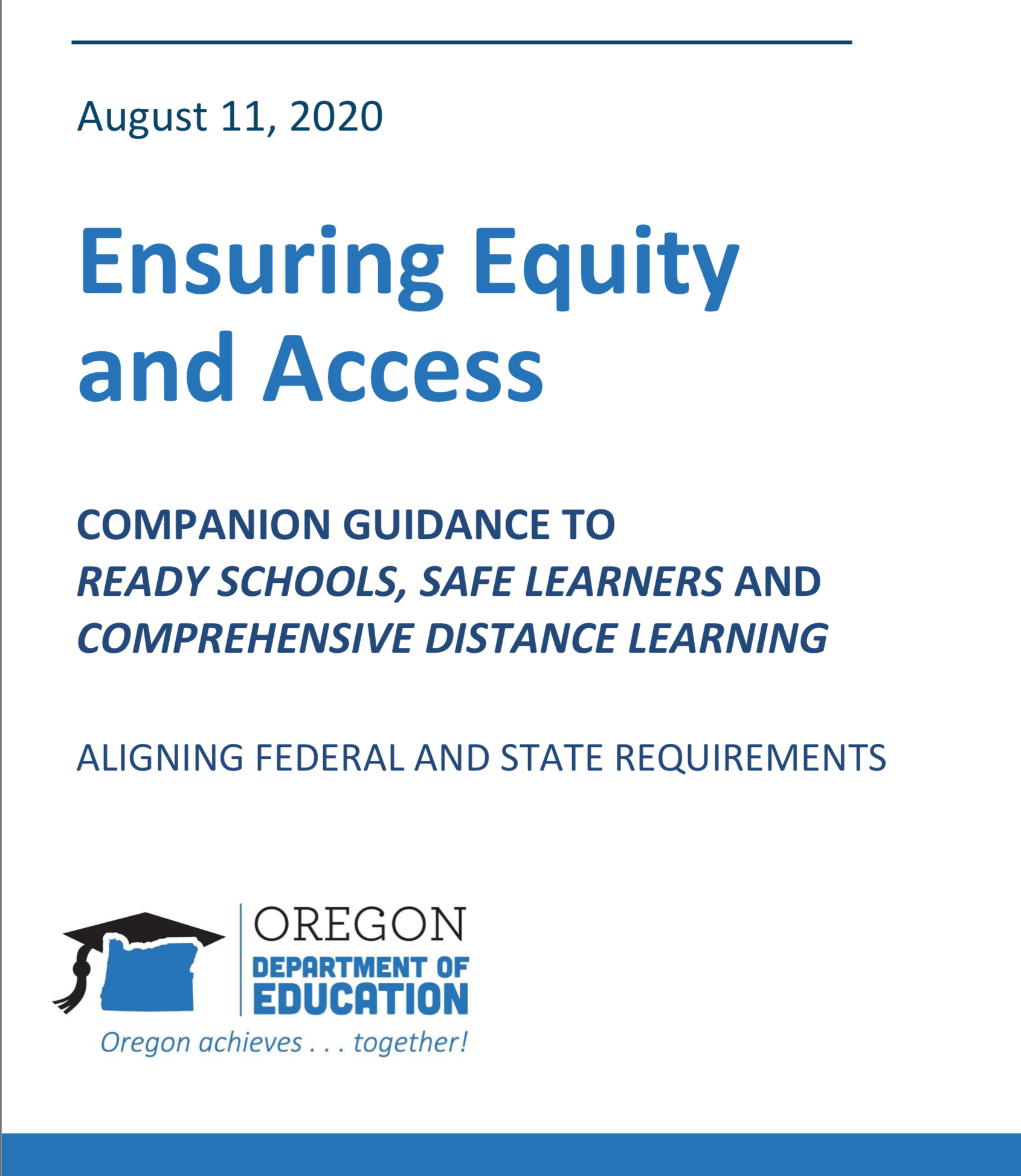 ODE’s companion guidance on equity works with districts, in part, to align federal and state requirements for the education of students furthest from opportunity. (Click image to view)

The federal government has given Oregon schools $115 million in pandemic relief money through the Cares Act, and they can use that money for distance learning technology. The state also received another $28 million to improve remote connections with computers, broadband and adult training.

Schools also can use their Cares Act money to sanitize facilities, organize long-term closures, and reduce inequities for children who are disabled, in low-income or minority households, English learners, homeless or in foster care.

Some districts are exploring ways to bring their youngest children in grades two and below into school a few times a week for socializing and “short bursts of instruction around numeracy and literacy,” says Gill.

Educators also may need to provide at least some services to children with disabilities in person. Schools will need to determine what can be provided online and what must be provided one-on-one, says Guynes, principal of Earl Boyles.

In its latest version of guidelines, released last week, the state told districts that they should prioritize in-person instruction for special education students, English language learners and other groups, even if county-wide cases are not low enough to allow a return for all students to the classroom.

“We’re trying to look through our equity lens and make sure we come through with plans to address disparities.” Under COVID-19, he adds, those disparities are “growing wider and wider.”

Parents and Teachers Weigh Quality vs. Safety in Pandemic