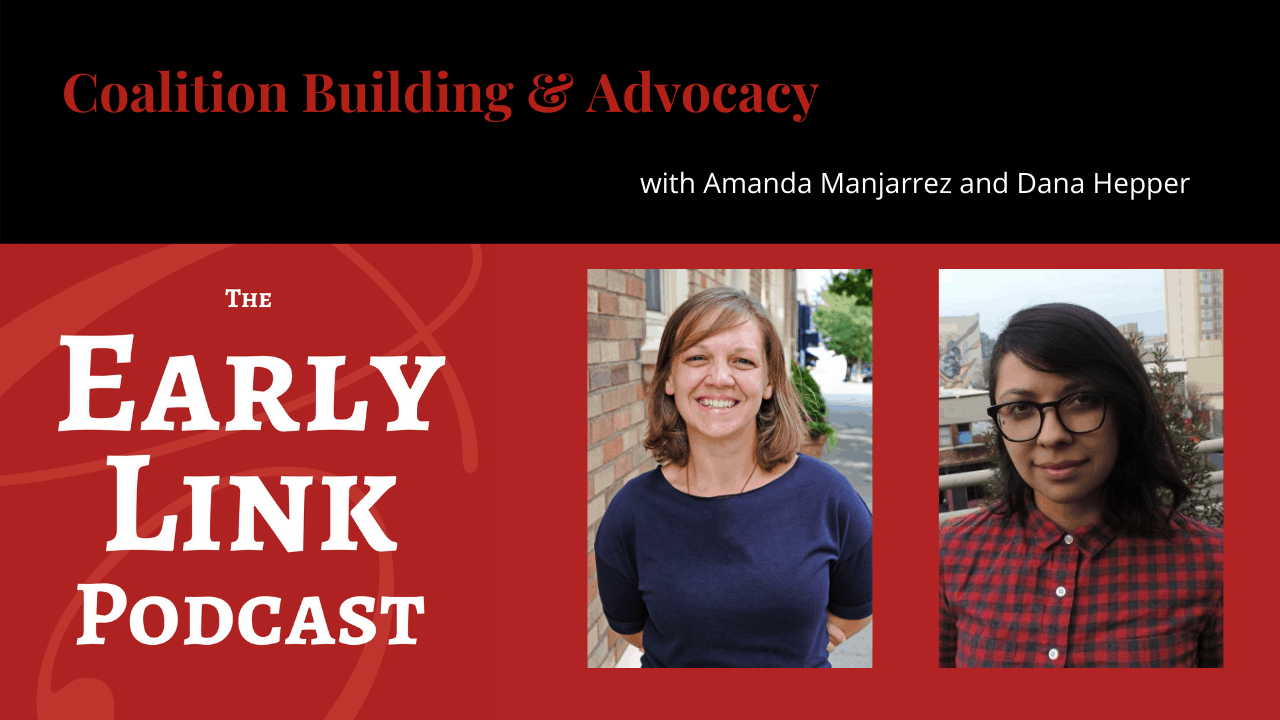 In this episode of The Early Link Podcast, host Rafael Otto explores the topic of advocacy and the details of two legislative agendas focused on building an inclusive, equitable, and just public education system.

Amanda Manjarrez is the public policy & government affairs director at Foundations For A Better Oregon. Previously, Amanda served as director of advocacy at Latino Network, and as advocacy director for the Coalition of Communities of Color.

Dana Hepper is the director of policy & advocacy at Children’s Institute. She oversees the organization’s legislative advocacy and community engagement work, including Oregon’s Early Childhood Coalition.

Oregon Partners for Education Justice is a cross-cultural network of community-based organizations, culturally specific service providers, and education advocates who are championing a racially just and community-centered public education system for Oregon. The coalition believes in the vision, wisdom, and leadership of impacted communities, and advocates for equitable policies and investments that eliminate disparities and empower historically underserved children. Foundations For A Better Oregon is the coalition’s coordinating member. Read their 2021 Legislative Agenda.

Oregon’s Early Childhood Coalition includes more than 40 state and national organizations that work to advocate for young children and families. The coalition asks legislators to commit to continued improvement in early care, education, and supports for all of Oregon’s young children and families and to center the voices of those most impacted by legislative actions in their decision-making processes. Children’s Institute serves as a coordinating member of the coalition and offers facilitation support. Read their 2021 Legislative Agenda.

In this episode, Amanda Manjarrez and Dana Hepper explain the priorities of the coalitions’ respective agendas as well as where they overlap. They also share why racial equity is key to an advocacy agenda, and discuss the need to build on the historic investments established in the 2019 Student Success Act.

Rafael: [00:00:00] This is the Early Link Podcast. I’m Rafael Otto. Today, we’re exploring the topic of advocacy and the details of two legislative agendas focused on education for kids from birth all the way through high school. I’m talking with Dana Hepper from Children’s Institute. She’s the director of policy and advocacy. And Amanda Manjarrez, who’s the public policy and government affairs director at Foundations for a Better Oregon. Amanda and Dana, welcome to the podcast.

Rafael: [00:00:28] So I know you’re both involved in two coalitions that are, that have been very active in, are active right now in the advocacy space, Oregon Partners for Education Justice, and the, and Oregon’s Early Childhood Coalition. I would love it if you could talk a little bit about these two coalitions, who’s involved, how you work and what your purpose is. Amanda, would you start us off?

Amanda Manjarrez: [00:00:52] Sure.  So I work most closely with the Oregon Partners for Education Justice, which is essentially a cross-cultural network of over two dozen community-based organizations, culturally specific service providers and education advocates who are working on efforts to create a more racially just and community-centered public education system for Oregon.

In terms of how we work, I would say the coalition is a BIPOC community-driven space that’s rooted in on the ground experience and expertise. So this really drives the conversations and the design and implementation of the agendas that we advocate for. And our purpose as an organization is to ensure that impacted communities are more involved in the development and implementation of equitable and inclusive education policy that centers kids, families, and those who are directly affected by systemic inequities.

Rafael: [00:01:44] And tell me a little bit about who’s involved in that coalition. What are some of the organizations or people?

Amanda Manjarrez: [00:01:49] Sure. it’s predominantly culturally specific partners. So those include organizations like the Latino Network, Adelante Mujeres, the Native American Youth and Family Center, Kairos PDX, Euvalcree, APANO, among many others. We have folks  from across the state who are providing services to families who work in the education space.

We also have education advocates like Foundations for a Better Oregon, the organization I work for, Children’s Institute and other organizations who do more work in the policy sector space.

Rafael: [00:02:24] Okay Dana, can you talk about the Early Childhood Coalition and who’s involved? How has the coalition been functioning? Kind of bring us up to speed.

Dana Hepper: [00:02:34] Yeah of course! The Early Childhood Coalition first formed to advocate for and support early learning investments in the Student Success Act in 2019. But after that session, the coalition decided to center racial equity in developing our shared agenda for the 2021 legislative session. Really recognizing that well, all children are born full of potential, and even young children can experience barriers to opportunity that are driven by racism, classism, and other forms of discrimination. And so we wanted to tackle those issues head on with the development of our legislative agenda. Many of the partners who are on the Oregon Partners for Education Justice also participate in the Early Childhood Coalition. Some that Amanda named, the Latino Network, Adelante Mujeres,  and we also have many early learning hubs and other child advocacy organizations. FACT Oregon works with families experiencing disability, the Head Start Association, and Relief Nursery Association, and foundations, as well as others.

So, that’s a summary of who we are.

Rafael: [00:03:49] In thinking about the language that the Early Childhood Coalition uses, I thought this was pretty powerful that children ages zero to five are the most racially, ethnically, and linguistically diverse Oregonians. And they are the group of Oregonians most likely to live in poverty.

And to me, you’re making the case for why a focus on racial equity is so important in the advocacy agenda. Can you say more about why that is and what that means in terms of the coalition’s priorities?

Dana Hepper: [00:04:17] Absolutely. I think early childhood advocacy has often focused primarily on serving low income children and closing income related opportunity gaps. But we know that not all gaps are driven by income. There’s actually an interaction between the impact of racism and the impact of economic disparity that layers.

And if we look at who are Oregon’s children, who live in low income families, children of color, especially Black children, Indigenous children and Latino children are more likely to live in families with lower incomes. And, if we really want early learning strategies to be effective, they need to be designed by and for the families that they’re intended to serve.

So we wanted to make sure as a coalition that we were doing a better job of ensuring the policies and investments that we advocated for weren’t just good for children that are low-income children generally, but that we specifically were thinking about how these policies would impact children who are Black, Indigenous, Latino, children of color and have an impact on those children specifically.

For the full transcript, please download the pdf below.