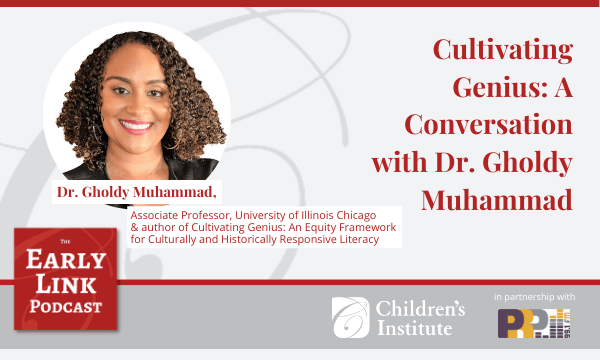 Join us Sundays at 4:30pm for new episodes of The Early Link Podcast. Listen live at 99.1 FM, online at PRP.fm, or stream wherever you get your podcasts.

This week, host Rafael Otto speaks with Dr. Gholdy Muhammad, whose research has focused on the social and historical foundations of literacy in Black communities and how literacy development can be re-conceptualized in classrooms today. She is associate professor at the University of Illinois Chicago, and is the author of the recent book, Cultivating Genius: An Equity Framework for Culturally and Historically Responsive Literacy.

Dr. Gholdy Muhammad is a leader who strives to shape the national conversation for educating youth that have been underserved. Her career also includes having served as a school district curriculum director responsible for K-12 literacy instruction, assessments, and professional development, and as a reading, language arts, and social studies middle school teacher.

Having received her PhD in Literacy, Language and Culture at the University of Illinois Chicago, her research interests are situated in the historical foundations of literacy development and the writing practices among Black communities.

Additionally, she works with teachers and young people across the United States and South Africa in best practices in equity, anti-racism and culturally and historically responsive instruction. She served as a literacy coach and school board president. She has received numerous national awards and is now a best-selling author.

Dr. Muhammad begins by giving us a history lesson on Black literacy societies going back to the 19th century, and how they influenced the writing of her book. Then, she notes how literacy itself has a much deeper meaning, particularly for Black people historically, in regards to liberation, power, self-determination, foundation of all learning, accumulation of knowledge, and more. This segues into the overarching definition of culturally and historically responsive literacy, and the four components that Dr. Muhammad suggests come with it: Identity, Skills, Intellect, and Criticality. She then gives an example of how this framework could be implemented for a specific classroom lesson plan.

There are noticeable challenges that teachers face when teaching culturally and linguistically diverse youth, which in turn, disproportionately and negatively affects students of color. Dr. Muhammad gives suggestions on what educators need to do to effectively implement culturally and historically responsive teaching and learning. Even those who are bound by the curriculum in their schools or districts.
Finally, the conversation closes with Dr. Muhammad giving us an idea of what culturally and historically responsive classrooms and school communities could look like in the future.

12 Questions to Ask When Designing Culturally and Historically Responsive Curriculum

​[00:00:00] Rafael Otto: This is the Early Link Podcast. I’m Rafael Otto. Thank you for listening. I appreciate you tuning in. You can always catch us on 99.1 FM in the Portland Metro on Sundays at 4:30 PM. Or tune in at your convenience, wherever you find your podcasts. That includes iTunes, Spotify, and Amazon Music.

Today, I’m speaking with Dr. Gholdy Muhammad, whose research has focused on the social and historical foundations of literacy in Black communities and how literacy development can be re-conceptualized in classrooms today. She is associate professor at the University of Illinois, Chicago, and is the author of a recent book called Cultivating Genius: An Equity Framework for Culturally and Historically Responsive Literacy.

Gholdy, it’s so good to have you on the podcast today.

[00:00:48] Rafael Otto: I wanted to talk about the book, Cultivating Genius. It offers a model for teaching and learning. So it’s really designed for educators and school leaders. And it uses a framework built on Black literacy societies going back to the 19th century. Can you talk a bit about what those societies were, and what they were designed for, and how did they influence the writing of the book?

[00:01:10] Gholdy Muhammad: Yeah. So, I discovered this part of history, Black history, American history, when I was a graduate student. And I read from a scholar named Elizabeth McHenry, Dorothy Porter, these are some of the writers who documented the practices of Literary Society members. And I discovered that in the early 1800s, around the 1820s, we developed these literacy clubs in urban northeastern cities, like New York, Philadelphia, Boston. And where in these cities where black folks had a little bit more liberties, they organized themselves and studied mathematics, literature, science, art, history. They lectured, they debated, they read, they wrote toward improving humanity, improving society, conditions within society. And they ultimately had a number of goals in their practices. They had goals of cultivating and advancing a sense of self and identity. They had goals of cultivating and advancing their skills, writing, reading, mathematics skills. These things that would put them in positions to also help with change.

They also had goals of cultivating their intellectualism. Their what I call in the book, criticality. Their anti-oppression, and then also their joy. And so I found the spaces to be so fascinating. I did not know why I did not learn about them in my own K-12 experience.

Like a lot of people in the United States, this part of history is not in the curriculum. It’s not in the books typically. But learning about them, it’s a fascinating and beautiful history. In addition to all these, this part of history was teaching me how to be a better teacher, how to be a better thinker, speaker. And so it’s a lot of implications for teaching and education.

And it was like I said, it was beautiful to read and discover. And at the same time, it was almost like. Well, why didn’t we learn this before?

[00:03:55] Rafael Otto: Right. It’s a wonderful part of our history that, I was not aware of either until I picked up your book. So I appreciate that. I also like the way you talk about literacy as this larger frame. Because so often today, when we talk about literacy or early childhood, we’ll talk about a reading proficiency by third grade. It’s kind of in this realm of skills and proficiency. But the way you talk about it has much deeper meaning, particularly for Black people historically.

So talk about what you mean by literacy in this historical context.

[00:04:30] Gholdy Muhammad: Yeah, and you’re absolutely right. Most of the time we see literacy defined as skills only as cognitions as something you have or don’t have; literate versus illiterate. And it wasn’t those binaries for black people historically, you know. Literacy was more than just having a test or a level of literacy, like a reading level or writing level, it was more than just skills.

It was reading the world, making sense of the context around you. It was meaning-making, making sense, like, you know. So I would find some literacy practices involve hair braiding, coding, using codes and songs and algorithms to send messages, quilting. They had very unique and nuanced language practices.

And so, the way I define literacy taken from these historical examples is, of course reading, writing, speaking, thinking, meaning-making; print, but all sorts of texts, the world as texts, the land as texts. And so it’s a bit of a wider way of conceptualizing literacy. And I found that the five pursuits, with the added one of joy, became a way of defining their literacy practices. So every time they were reading, writing and thinking, historically, they were building identity skills; intellect, criticality, and joy. And so that’s how those five pursuits became so connected to the ways in which they define literacy.