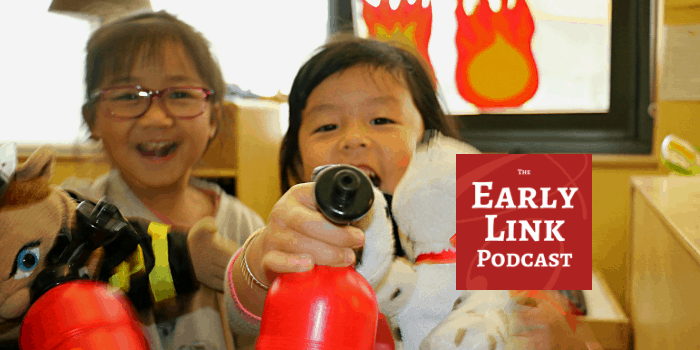 The Ready, Set, Go! Play and Learn program at Earl Boyles Elementary School gives children from birth to age 3 and their caregivers opportunities to learn in a child-centered and culturally responsive environment. The program, in its second year at Earl Boyles, builds parenting and social and emotional skills, and strengthens relationships between families and schools.

Judy Strand, the CEO of Metropolitan Family Service, which runs the program, highlights the results of the program, while Program Coordinator Maria Perdomo explains, “We notice how the children have been improving in their skills—social/emotional skills, cognitive skills—and how the parents are improving how they connect with their children and support them with positive discipline.”

Highlights from the podcast:

0:50: We visit a session of the Ready, Set, Go! Play and Learn group that took place in October at Earl Boyles Elementary School, listening in on their opening activities and a song.

1:38: We speak with Judy Strand, the CEO of Metropolitan Family Services (MFS), about what it takes to launch a program like Ready, Set, Go! Play and Learn. She explains the importance of strong partnerships between funders, the school, and the district.

2:36: Maria Perdomo, the Program Coordinator tells us about the importance of family involvement in the program. “We notice how the children have been improving in their skills—social/emotional skills, cognitive skills—and how the parents are improving how they connect with their children and support them with positive discipline.” Positive outcomes are most noticeable when parents attend the parenting classes. While programming for newborns to three-year-olds is only two years old, Ready, Set, Go! Play and Learn has been serving preschoolers for a decade.

4:03: Evaluation is a key piece of both programs. Judy Strand details the longitudinal study conducted by Portland State University on the preschool-aged children enrolled in the program. Children from families whose first language was not English were found to enter kindergarten slightly behind their peers, but had closed that gap by third or fourth grade.

4:49: PSU researchers found that the literacy achievement gap among children in the program was eliminated by third grade.

5:05: Data shows that the average social-emotional score for children enrolled in the program was consistently higher than the state average.

5:35: There’s a high correlation between positive outcomes and the number of times parents attend parenting classes.

6:06: Five parents now work for the Ready, Set, Go! program, having been inspired to pursue careers in early education.

6:25: The North Clackamas School District has reported that the Spanish-speaking children coming into kindergarten from Ready, Set, Go! are more prepared for school than children who did not participate in the program.

6:49: Maria describes one parent’s success story and the impact the program has had on the family.

7:50: We speak with Rosario, a parent who has participated in the program. She describes how her participation changed her parenting and gave her kids new skills. Ready, Set, Go! opened doors for Rosario’s family, which didn’t qualify for Head Start.

9:11: The Play and Learn Group is filled with play-based activities, and often brings in guest teachers who offer lessons on topics like using sign language to communicate with kids.

9:30: There is a demand in the community for more programs like Ready, Set, Go! The limiting factor is funding.

10:05: Judy Strand explains MFS’s focus on lasting change, such as improvements in social-emotional skills which can equip children to deal with challenges later in life.

In this episode, host Rafael Otto speaks with Oregon state representatives Karin Power (D), representing Milwaukie, Sellwood, and Southeast Portland, and Jack Zika (R), representing Redmond. Power and Zika serve as the chair and vice-chair of the House Committee on...

END_OF_DOCUMENT_TOKEN_TO_BE_REPLACED

In this segment of The Early Link Podcast, host Rafael Otto speaks with Rashelle Chase-Miller, who is an activist and a mom. She’s authored many articles and works in early childhood curriculum development. She’s also founder of Mxm Bloc, a Black mxm led mutual-aid group that supports Black families, and Reproductive Rights PDX.