Preschool as a Political Winner

State and local leaders across the country are becoming increasingly vocal about their support for early education, and universal preschool programs in particular.

A recent study  from Duke University found that North Carolina’s “More at Four” preschool program, launched in the early 2000s, has resulted in academic improvements that have continued through middle school, reduced the costs of special education, and narrowed achievement gaps due to race, income, and parent education levels. Other notable success stories in traditionally conservative states like Oklahoma, and Alabama have political leaders of all stripes taking notice.

“Over the last five years, we’ve really seen a sea change in the level of awareness and knowledge about about the importance of early childhood,” said Dana Hepper, Policy and Advocacy Director at Children’s Institute. “Lawmakers have a great opportunity to take that understanding to the next level. Expanding access to preschool is a key part of a comprehensive strategy to improve opportunity and outcomes for kids… We know that their constituents are absolutely ready and excited to see positive changes for Oregon.”

As initiatives like universal preschool enjoy more prominence on the political agenda, here’s a collection of stories that highlight recent successes and cautionary tales from across the country:

Julian Castro, a Democratic nominee for president, highlighted his role in expanding preschool as mayor of San Antonio in his announcement speech. The city funded it  partly through a sales tax approved by voters in 2012. 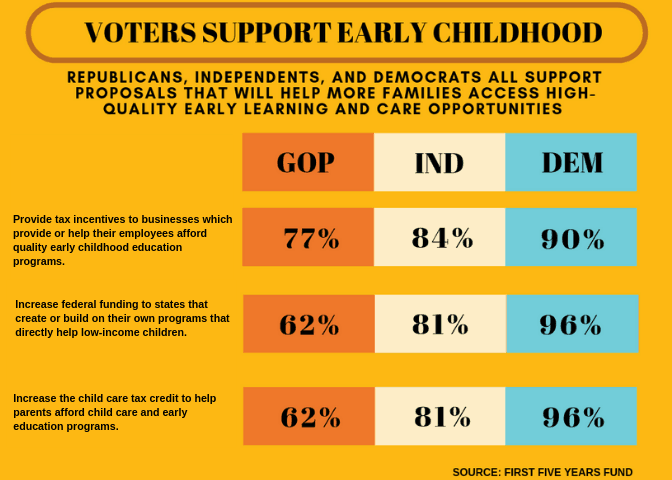 In New York City, Mayor Bill De Blasio finds that his push for universal preschool is a bright spot in an education reform effort that has offered a mixed bag of results so far. The city is now expanding its program to include 3-year-olds.

The Seattle Times editorial board states it plainly, “One of the best investments the state can make in the economy and its citizens is money spent to educate Washington’s preschoolers. The Legislature should make funding high-quality early learning a top priority in this and every legislative session.” Governor Jay Inslee has proposed increasing access to preschool by 4,446 children in the next biennium, as part of a $174 million package of investments into early learning.

Preschool’s bipartisan appeal was evident in Ohio as Republican Mike DeWine won the governorship with a platform that included lowering income eligibility levels for publicly-funded programming and improving program quality, with a goal of reaching 20,000 more children.

What California Can Learn from Universal Preschool in Other States

Advice to California on how to successfully implement universal preschool programming could just as easily serve as a roadmap for Oregonians seeking guidance on where other states and communities have succeeded and stumbled.

Early childhood advocates hope that the positive momentum and attention on universal preschool will help drive continued investments toward supporting a child’s earliest years.  By the time children start kindergarten, gaps in literacy, math, and social emotional skills are already evident based on family income and racial background.

Learn more about our legislative recommendations and add your voice to advocate for early childhood.