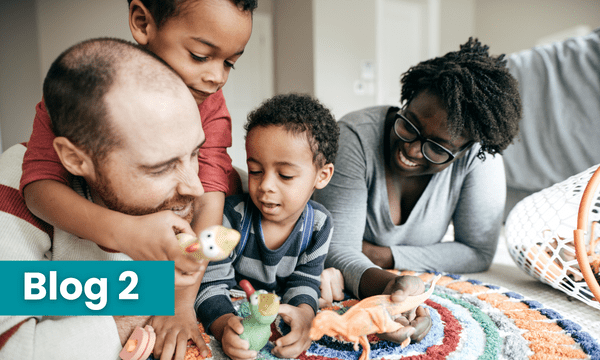 Social-emotional learning (SEL) has been in the news a lot lately, and this recent surge of news about SEL has come with a good deal of misinformation. In this blog series, we’ll attempt to set the record straight on SEL by exploring the benefits and importance of SEL for young children, highlighting its recent politicization, and understanding what polling tells us about the best way to communicate with parents about the topic. While trying to gain a better understanding of parents’ perceptions around SEL, I found a 2021 survey of K-12 parents commissioned by the Fordham Institute to be particularly helpful. To learn more about the survey’s findings and in an effort to better understand some of the concerns about SEL that have been expressed by conservatives, I interviewed Fordham’s Adam Tyner via email. Adam is national research director at Fordham and managed the survey project.

Let’s start with the basics. What made you decide to poll parents about their views on social and emotional learning (SEL)?

As your readers surely know, SEL has become a big buzzword and a big industry in recent years. The term has been around for a couple of decades, but around 2015 it really took off. What wasn’t clear to us is what parents thought of this new fad in education, so we worked with the global polling firm YouGov to conduct this survey.

How many parents were surveyed in the poll and when was the poll conducted? What were the key findings from the poll?

We surveyed 2,000 parents of students in grades K through 12 in the spring of 2021, but we also conducted some mini-surveys in the months before and after that to see if parent views were fluctuating substantially in response to the pandemic or the 2020 election. Parent views were relatively steady during that time, but after the controversies around critical race theory and school reopenings emerged in the summer of 2021, it’s quite possible that parent views on SEL have also shifted somewhat since our study concluded.

We wrote a whole report that is available at sel.fordham institute.org with five key findings and four policy recommendations — along with selections from parent free responses and other background and context. A couple of things stood out to me about parent views of SEL.

First, parents strongly support schools teaching all of the specific SEL-related competencies we asked about. These include stuff like setting goals, navigating social situations, and controlling their emotions. On the other hand, parents aren’t nearly as excited about the term “social-emotional learning” itself. (They far prefer the term “life skills,” however cringy that is to education experts.)

Second, when forced to make tradeoffs, parents want schools teaching analytic and practical education above all: the top valued skills were reasoning, math, vocational education, English, and taking responsibility for one’s actions. This may be because the survey also found that parents overwhelmingly see the family, not the school, as the most important venue for cultivating SEL.

Something I’m not sure about is whether the average parent who is busy with their job and raising a family really knows what is meant by the term “social and emotional learning.” What did the poll find in terms of describing these life skills in ways that parents understand and support?

Consider the fact that when we asked parents a bunch of agree/disagree questions related to SEL in schools, there was over 90 percent agreement with the statements, “I want my child’s school to give them honest feedback on their academic progress and performance even if it may hurt their feelings,” and “Working hard helps students develop strong character.” Of all the SEL-related skills we asked about, “reasoning” and taking “responsibility for actions” were the top two most important. But I’m not sure this kind of stuff is what most SEL advocates are promoting.

This is all to say that there may be a big gap between the world of practices that support students’ social and emotional learning and new programs serving up trademark SEL. Since ours was a survey of parent views, it asked a relatively broad set of questions related to SEL and its implementation. Some of the survey questions were aligned to SEL domains in the Harvard EASEL Lab, and the survey defined the term as “the process of developing self-awareness, self-control, interpersonal skills, responsible or ethical decision making, and civic awareness.” Hopefully parents understood that, but I think it’s doubtful that the average parent has much of a sense of the nuances of the jargon-laden conversations around SEL.

A recent Washington Post article quoted a conservative parent group that referred to SEL as, “the latest child indoctrination scheme.” Why do you think SEL has become more controversial to some activists on the right recently?

I think there’s a few things going on. One is that there’s always been a “three Rs” contingent among parents that is skeptical that schools can do anything besides basic academics well (and maybe not even that). That means that when you start talking about the “fluffier” stuff in education, it automatically turns some people off. Then you have some people who are skeptical of the education establishment more generally and may feel like public schools are in some ways promoting values at odds with their own. When these folks hear about the fluffier stuff, they may perceive ulterior motives. SEL is more related to values than is, say, how you teach the periodic table, so it is natural that the topic will stir up more passion than more mundane school policies.

Another issue is that many conservative parents probably aren’t very interested in using the education system to equalize outcomes at an individual or social level, and tying SEL to equity as the CASEL organization and others have done, raises red flags for them. Many conservatives will get on board with the idea of “leveling the playing field” — and many strongly support their local public schools — but equity implies equalizing outcomes, which many conservatives do not think is ideal or practical. That means that connecting SEL to equity will naturally raise red flags for some conservative parents, especially those who are skeptical about what is going on in schools in the first place.

The jargon is also part of the problem. Along with terms like critical race theory, you’ve seen SEL pop up on lists of education terms that conservatives are concerned about in part because of what I was alluding to earlier about how ill-defined the term SEL is. The jargon excludes people from the conversation, and an understandable reaction to being excluded through jargon is to wonder what is being hidden.

Considering the recent controversy around teaching SEL in some communities, what should educators and policymakers who are looking to productively engage their communities in SEL efforts take away from the poll’s findings?

Our survey showed that parents — whether Democrat or Republican, Black, Hispanic, or White — believe that the family is the most important venue for cultivating SEL. That means that engaging the community is more important on this issue than it would be for an issue that is more squarely in the school’s wheelhouse.

Diverse communities are going to include some skeptics, and some of these skeptics are going to connect SEL to other controversies. That makes it very important for educators to speak plainly and concretely about whatever SEL-related plans they’re making. If you’re arguing about the abstract idea of an SEL program, not only does that term not resonate with parents the way “life skills” does, but also vague and abstract ideas are more likely to get people’s preconceived ideas projected onto them. So some parents might imagine it is helpful, while others suspect SEL might be related to outrageous examples of school policies or teacher misbehavior that they’ve seen on the internet. Instead, speaking about a very specific new practice that the school is implementing — adding a box to math worksheets to remind students of the importance of their effort, etc. — allows parents to engage that on its own terms rather than just projecting something, good or bad.

As I alluded to earlier, it’s not always clear what SEL programs are supposed to be doing or why all this new jargon is necessary in the first place. Putting up a wall of jargon around an issue on which the public has a strong stake and significant knowledge is elitist, and no one should be surprised by the pushback. Recall that parents strongly supported schools teaching all of the specific SEL-related competencies our survey asked about. But whether they support it or not, saying it in plain English will allow parents to engage, and since parents know a lot about their own children, getting their input will probably lead to better policy.

This work is licensed under Creative Commons (CC BY 4.0). It is attributed to Aaron Loewenberg and Nicole Hsu. The original version can be found here.

Setting the Record Straight on Social-Emotional Learning: An Introduction

Social-emotional learning (SEL) has been in the news a lot lately, and this recent surge of news about SEL has come with a good deal of misinformation. In this blog series, we’ll attempt to set the record straight on SEL by exploring the benefits and importance of SEL for young children, highlighting its recent politicization, and understanding what polling tells us about the best way to communicate with parents about the topic.

END_OF_DOCUMENT_TOKEN_TO_BE_REPLACED

On our latest episode, host Rafael Otto speaks with Dr. Christian Molstrom about the opportunities that summer camps provide for kids, and some of the challenges they may encounter before they attend.