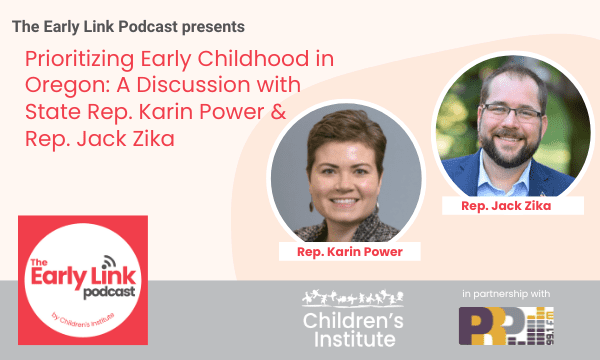 In this episode, host Rafael Otto speaks with Oregon state representatives Karin Power (D), representing Milwaukie, Sellwood, and Southeast Portland, and Jack Zika (R), representing Redmond. Power and Zika serve as the chair and vice-chair of the House Committee on Early Childhood, and both are retiring this year amid historic turnover in the legislature. They have both been early childhood champions and we are grateful for their efforts over the years!

Both Reps. discuss why early childhood is important to them, and explain the significance of an early childhood committee in the legislature. They discuss legislative priorities in Oregon’s early childhood sector, such as supporting the expansion of facilities and strengthening the workforce, and share what they’re hearing from their constituents.

With both of their terms concluding next January, they talk through what it would take to make sure early childhood remains a legislative priority, how communities can assist and engage, and offer advice to incoming legislators.

Representative Karin Power grew up in a small town in New Jersey and went to Mount Holyoke College in western Massachusetts before moving to the west coast. She’s spent time in Geneva, Washington, D.C., Boston, Seattle, and Portland before making her home in Milwaukie. Rep. Power and her wife live in Milwaukie with their toddler and two rescue dogs. In her other job, Rep. Power is associate general counsel for The Freshwater Trust. She is a graduate of Lewis & Clark Law School.

As a new mother and first-time homeowner, Rep. Power knows how crucial stable housing and public education are to building successful families and communities. Rep. Power is also the first LGBT woman elected to serve House District 41. She understands how important it is to make our government more accessible, and champions equitable policies, both for the Oregon we are today and for the generations yet to come.

Representative Jack Zika was born in Ohio and attended the University of Cincinnati. He worked as a securities trader and, immediately prior to his election to the Oregon House of Representatives, as a realtor in Bend.

Rep. Zika and his family love Central Oregon and he considers it an honor to represent the region. His interest in affordable housing and other kitchen-table issues like child care comes from the fact that he and his wife Zanthel are raising two young children in Redmond. In addition to housing and child care, Rep. Zika has worked on legislation to help Central Oregon’s veterans from his position on the Veterans and Emergency Preparedness Committee, and also on wildfire prevention.