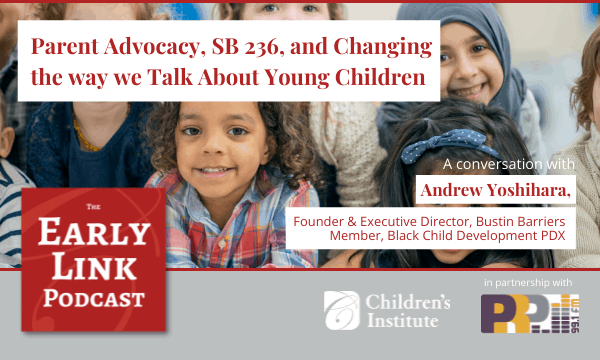 On this episode of The Early Link Podcast, host Rafael Otto speaks with Andrew Yoshihara, who is a member of Black Child Development PDX and founder and executive director of Bustin’ Barriers, a nonprofit organization that serves kids with disabilities. He is also a parent advocate and has been involved with legislative advocacy in 2021.

Andrew begins by recounting how he got involved with Black Child Development PDX, and what influenced his decision to testify on behalf of Oregon Senate Bill 236. With the recent passing of the bill, he then notes his wishes for the future in regards to the suspension and expulsion that disproportionately affects Black and brown children.

Next, Andrew discusses his role as founder and executive director of Bustin’ Barriers. Specifically what it means to him to act as a mentor to the kids in the program. Then he circles back to his advocacy work with Black Child Development PDX, and notes how he witnessed true “Black excellence,” among his colleagues.

Ultimately, he believes that although there is still a lot of work to do on an institutional level, the passage of this bill will give these kids a real chance to be heard and understood.

Rafael Otto: Welcome to the Early Link Podcast. I’m Rafael Otto. I appreciate you tuning in as always, whether it’s on 99.1 FM in the Portland area, streaming at prp.fm or wherever you find your podcasts. If you do tune in on the radio, you can find us on Sundays at 4:30 PM.

Today, I’m speaking with Andrew Yoshihara, who is a member of Black Child Development PDX and founder and executive director of Bustin’ Barriers, a nonprofit organization that serves kids with disabilities.

He’s also a parent advocate and has been involved with some legislative advocacy in 2021. Andrew, great having you on the podcast today. How are you?

Andrew Yoshihara: I’m doing well, man. Thank you for having me.

Rafael Otto: Great to have you here. Let’s talk a little bit about your story in terms of how you got involved with Black Child Development PDX. What did that look like?

And, during the time of getting those services, we’ve met some really great providers that helped us with our children. And one of those providers told me about the bill that BCD PDX was trying to move forward and they were looking for some parent support for somebody to come testify.

I had some time in my schedule, so I decided to sign up to testify. And honestly it just was one of the most amazing experiences that I’ve had. And I’m so glad that someone kind of pushed me in their direction. I’m super excited to become a more intricate part in their organization to help them keep on fighting for Black children and all of these things.

Rafael Otto: Tell me about that experience of testifying. What was that like for you?

Andrew Yoshihara: Yeah, man. So I run a nonprofit that I founded, as you mentioned before. So, being an executive director, you know, a lot of my work is public speaking in front of a lot of people, a lot of meetings, all the time. So, the speaking part was not really anything new to me.

The interesting part to me was the processes and procedures that everyone followed in the legislative process, and just how this bill was treated in terms of it being predominantly a bill pushed by a Black organization to really help Black children and other marginalized populations,  specifically with the emphasis on Black children, and it felt a little jumbled in the processes.

Rafael Otto: Was it hard to find advocates in the legislature for SB 236? And I guess we should just recap a little bit: SB 236 bans suspension and expulsion in early childhood settings. That bill was passed, late in the legislative session for 2021. That ban will go into effect in 2026. And I think it’s also important for people to know that there are supports built into that plan for educators, for working with young children. And I know that part of the reason that Black Child Development PDX became involved in this issue is that suspension and expulsion disproportionately affects children of color and in particular Black children, and even more specifically Black boys in early childhood settings.

So that’s a little bit about what the bill entails and my original question was, did you find… was there support in the legislature for it? Was that difficult to find?

Andrew Yoshihara: I can’t say that it was hard to find support because the bill passed, which we’re super grateful for. What was hard was to hear a lot of the language that was coming out of some of the legislators’ mouths about, you know, these children and these are babies. These are pre-K.