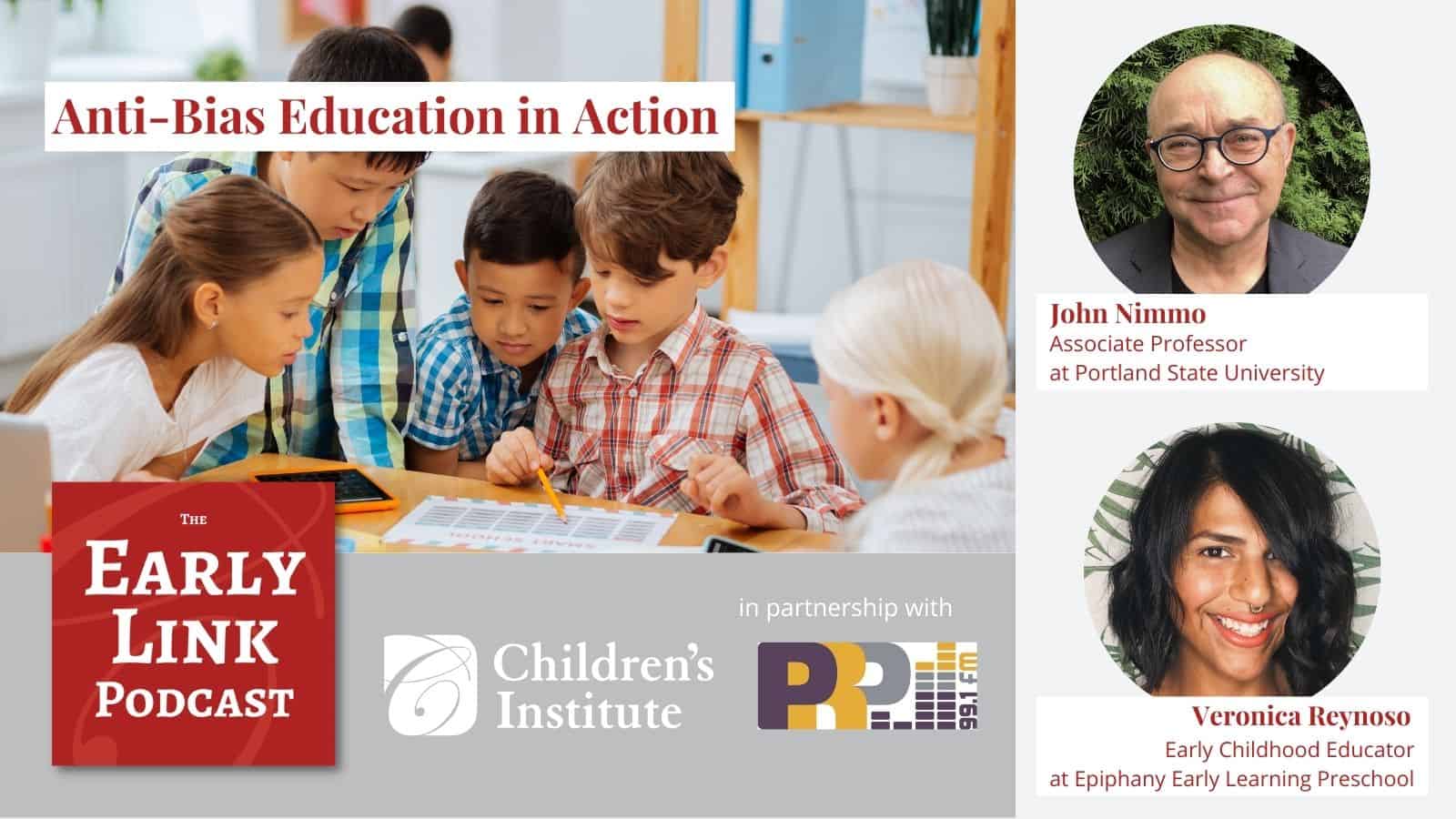 In this episode of The Early Link Podcast, host Rafael Otto speaks with professor John Nimmo about the film he co-produced, Reflecting On Anti-Bias Education in Action: The Early Years. They are joined by one of the teachers featured in the film, Veronica Reynoso, who shares her insight on the value of anti-bias education.

John Nimmo, EdD is Associate Professor, Early Childhood Education, in the College of Education at Portland State University. John is a co-producer of an international video documentary on children’s rights and also a 2021 film on anti-bias early education. He holds a doctorate from the University of Massachusetts at Amherst and was previously an early childhood and elementary teacher in his first home of Australia and in the United States.

Veronica Reynoso is an Early Childhood Educator and Mentor Teacher at Epiphany Early Learning Preschool in Seattle, Washington.  Life experience and her experiences at Epiphany Early Learning helped shape her strong commitment to anti-bias and anti-racist education with young children. She is featured in the film, Reflecting On Anti-Bias Education in Action: The Early Years.

John talks with Rafael and Veronica about the origins of the film and its intended audience. He also discusses why its important to have anti-bias education for young children even if it means  having hard conversations about disability, race, or gender. Additionally, as one of the teachers in the film, Veronica reflects on her experience, and shares her insight on how to incorporate anti-bias education in the classroom.

Rafael Otto: [00:00:06] Welcome to the Early Link Podcast. I’m your host, Rafael Otto. As usual, you can catch us on the airwaves on 99.1 FM and Portland on Sundays at 4:30 PM. Or subscribe and listen, wherever you find your podcasts. Today, I’m speaking with John Nimmo, associate professor of Early Childhood Education at Portland State University, and one of the producers of a new short film called Reflecting on Anti-Bias Education in Action: The Early Years. I’m also speaking with Veronica Reynoso, who is a teacher featured in the film. She currently teaches preschool in Seattle, Washington. Veronica and John, great to have you on the podcast today.

Thanks for joining me.

Veronica Reynoso: [00:00:46] Yeah, excited to share more about anti-bias education. Thanks for having us.

John Nimmo: [00:01:05] Yep. Either 1989 or 1988 but about then. Our colleague, Louise Derman-Sparks, who’s pretty well known internationally for the anti-bias education approach, was the creator of that film. And, uh, you know, it was about 30 minutes. You can still find it on the web and it’s sort of indicative of the time of video and sort of the colors getting washed out…

John Nimmo: [00:01:29] Uh, yeah, somewhere there, but it had an incredible impact at that time. Really what it was doing was introducing this idea, this approach of anti-bias, (what it was called curriculum then, now education) to the world. It was exactly the same time that they released the first book Anti-Bias Curriculum, which is one of the biggest sellers that NAEYC has.

I think we’re talking about a million copies. They just recently released a… sort of the third version of that book. So it really had the job of introducing this idea to the world and as an alternative to the idea of multiculturalism, which had become a little bit washed out and meaningless as a term at that time.

Rafael Otto: [00:02:09] Talk about the impact from that film. How did it inspire you to make the one that you just released last week?

John Nimmo: [00:02:15] Well, my colleague and I, Debbie LeeKeenan, had been doing a lot of workshops working together over the years. And of course we were constantly asked, “What does this look like in practice?” Because people want to see, not just hear. And she had talked a little bit about wanting another film because we had both used this film, but it was of course getting pretty old and dated. There are maybe one or two other films, again, pretty dated, maybe 20 years or more ago that existed. But otherwise there really wasn’t anything other than the more generic professional development films, which were mostly talking heads – you know, experts talking over images of children – but no real action from the classroom.

So it really came out of a need for teachers to be able to get some sense of what does this really look like in the classroom? So that film had an impact on us of sort of introducing us to the ideas, but really a lot of the scenes in it were, um.. some of them were real and some of them were staged. Again, probably more talking heads than we would have liked because it was more of a training film, but we wanted something that was more provocative and would engage people in conversation rather than the typical, training/professional development film.

Rafael Otto: [00:03:33] Yeah, that’s something that I appreciated about the film. It was…  we’re really seeing what it’s like in the classroom, hearing the kids participate, hearing what it’s like for teachers who are working with children. A very hands-on, practical tool it seems like to me.

Veronica Reynoso: [00:03:52] It was a incredible opportunity to really showcase something that I feel strongly about like, I think everybody should be teaching anti-bias, anti-racist education in their classrooms because these are ideas and theories that children are building from the very beginning, even before they enter my classroom.

So being a part of it was an honor. Especially because I saw the 1989 version in college and I remember sitting in my classroom and even then, which that was 2009, I remember sort of raising my eyebrow and being like, “Hmm. Some of these ideas feel a little outdated right now..” So it was really great to be a part of this project that I had seen in college and to show that this work is continuing, that it’s ever evolving. And I hope that there continues to be more work around it. And that there’s another one in a year, two years, three years because children and each generation that comes, like I tell the children in the classroom everyday, you are teachers too.

You’re teaching me the same way that I am here to teach you. So yeah, it was really exciting to be a part of the project.

For the full transcript, please download the pdf below.