A Trip Down Memory Lane at Orchards Head Start 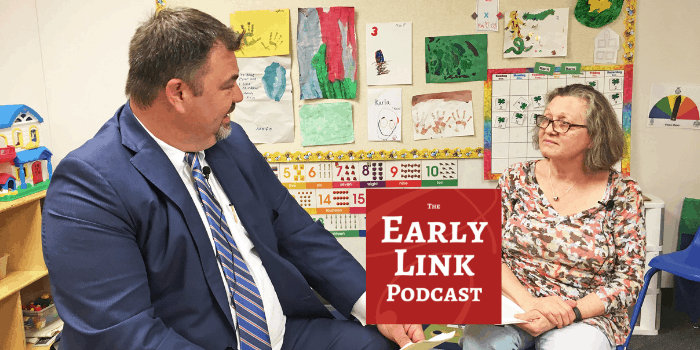 Bob Harding and Teri Seaton are two people who might not seem like they have much in common. Bob works as a bank executive and, with his wife Shannon, is raising three young kids on a 5-acre hobby farm in Stafford, Oregon just east of Tualatin. They have 30 chickens, 3 goats, a cat, and a dog.

Teri Seaton lives in North Portland with her husband, Greg Stevens. Not a single chicken, goat, dog or cat can be found in her house. But though she has no children of her own, she does spend a lot of time with them. Teri, you see, is a Head Start preschool teacher. And Bob, you might be surprised to learn…was once a Head Start student.

Child advocates, education, and political leaders have called for increasing access to early learning and early childhood programs. That’s alongside a growing body of research on the long-term benefits of early care and education programs in general. With that backdrop in mind, we wanted to hear directly from those who have benefited from the program and those who work directly with children and families every day.

Two Generations of Impact: A Mother’s View on Head Start

I had been separated from your dad and he was nowhere to be seen for about six months when my in-laws came from Florida to help us move somewhere near enough so that he could visit if he chose to.

Philip was going into third grade, Ana into second, and Maria into Kindergarten. You, just turning four, were going to stay home with me for another year.

Since your dad had not been giving us any money, we qualified for free lunches and I was asked if I wanted to register you for Head Start, a program I had never heard of and which turned out to be the greatest break in our lives.

I can’t describe the joy I felt that you were in this blessed program. That fall, I was able to go door-to-door selling Avon three days a week and volunteered at Head Start two days. They appreciated my help and as I had gone to Catholic School, I could teach the kids how to use a knife and a fork, and also some good manners.

Thanks to Head Start you started on your upward trajectory which has taken you far: successful as a family man, a friend, and a professional.

– Vera Harding, in an email to Bob Harding