Setting the Record Straight on Social-Emotional Learning: A Teacher’s Perspective 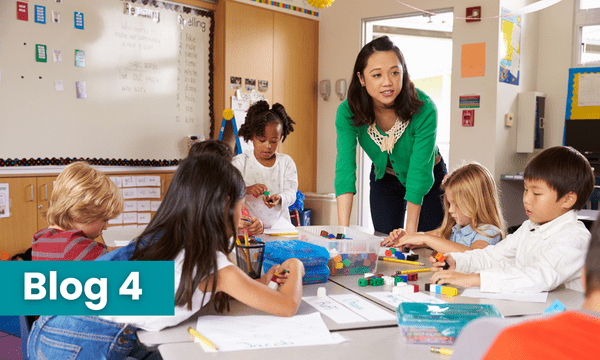 Social-emotional learning (SEL) has been in the news a lot lately, and this recent surge of news about SEL has come with a good deal of misinformation. In this blog series, we’ll attempt to set the record straight on SEL by exploring the benefits and importance of SEL for young children, highlighting its recent politicization, and understanding what polling tells us about the best way to communicate with parents about the topic.

The term “social-emotional learning” does not necessarily lend itself to a clear picture of what takes place inside the classroom, especially when compared to a reading or math lesson. Some parent groups have taken advantage of the general lack of understanding about what social-emotional learning (SEL) actually looks like to accuse teachers of acting as “unlicensed therapists” in the classroom or using SEL to indoctrinate students. Others are drawing comparisons between SEL and critical race theory, stating that SEL is somehow related to an agenda that encourages students to “dismantle our country.”

This simply isn’t true. For this blog post, we attempt to clear up the picture of SEL by going straight to the source to learn more about how SEL is taught, the goals of teaching SEL, and what sort of topics SEL lessons cover. Far from attempting to indoctrinate students into any sort of ideology, we find that, when done well, SEL helps equip students with the skills needed to be happy and successful members of the classroom.

We interviewed Nury, a veteran teacher with over twenty years of experience who teaches three, four, and five-year-olds in a public charter school in Washington, DC.

Nury emphasized the importance of teaching social-emotional skills throughout the school year, but noted that these lessons are especially important at the beginning of the year: “Some children come to school with limited vocabulary or limited opportunities to interact with peers. That can challenge them to express their needs, ideas, and emotions. However, with this daily focus on social skills and practice, our children show progress in healthy social interactions and vocabulary.” 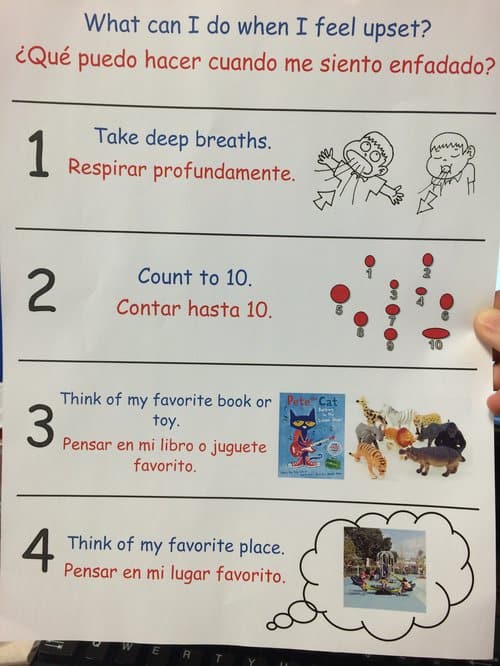 SEL lessons at the beginning of the school year often focus on things like paying attention to teachers and classmates, helping students ask for what they need or want, and calming down when upset (see chart to the left). For example, students are guided on what to do when faced with common classroom scenarios, such as needing help tying their shoes or putting on their coat. SEL lessons often focus on understanding different facial expressions to help children in identifying feelings such as happy, sad, surprised, and angry.

“When children don’t know how to take turns, resolve social conflicts or ask for help, we guide those students to gradually develop the strategies and vocabulary to be focused and collaborate,” said Nury.

Over the course of the year, these lessons build on each other as students become more confident in their ability to problem solve in social situations. For example, students learn to use their words to apologize to classmates when they accidentally did something, such as knocking over building blocks, that upset a peer (“I didn’t mean to. It was an accident. Are you okay?”). Students also learn about the benefits of using positive as opposed to negative self-talk (“I can do it if I work hard!” as opposed to “I’m no good at math.”).

We asked Nury how she knows that her students are making progress in their social-emotional skills throughout the year: “We see progress when students become more independent in daily routines and are more willing to do things for themselves. We also see by the end of the year that the students start to develop a sense of community and teamwork by showing respect, empathy, and kindness for others.”

We asked Nury if she was able to think of a specific student who showed a lot of growth in their social-emotional skills over the course of the year and she immediately shared the story of Bill* with us:

He was a child with difficulties in making friends, regulating his own emotions, waiting his turn, and sharing. Bill also came to the school with a limited vocabulary. He did not have a positive concept about himself because he said that other children were not interested in playing with him. So he played alone most of the time. When he wanted to get closer to a group of children who were playing, he just watched them with interest for several minutes…observing the way they were playing.

We started working with Bill one-on-one and also with the whole class in different activities to promote social-emotional skills so he can learn how to identify and manage emotions, make friends, share, wait for a turn, and learn and use strategies that will help him feel better when he experiences strong emotions. Gradually, Bill began to show greater interest in playing with other children, initially by asking for a teacher to help. And then, little by little, he began to approach other children, smiling, and then putting out his hand as a sign of interest in playing with them.

After some months, he was able to use his words independently in different social situations. Bill also developed the skill of being able to label his emotions and express himself properly when he felt angry or happy or sad or frustrated or upset. After seeing this amazing progress with Bill, one day he went up to an adult who was having a hard moment and said to her, “Maybe you are feeling frustrated today. I think you need to take a big breath to feel better.”

Nury’s story about Bill’s progress throughout the year highlights how, when done well, SEL builds skills that help young children become happier, more confident students. Far from being a “child-indoctrination scheme,” SEL is focused on building children up so they have the skills necessary to live confidently in the world. Nury perhaps said it best about the ultimate goal of SEL: “We need to build self-worth in our children so they can face the challenges that life will bring to them in a more resilient way.”

* ”Bill” is a pseudonym used to protect student privacy.

This work is licensed under Creative Commons (CC BY 4.0). It is attributed to Aaron Loewenberg and Nicole Hsu. The original version can be found here.

Read more from this series

END_OF_DOCUMENT_TOKEN_TO_BE_REPLACED

Setting the Record Straight on Social-Emotional Learning: The Business Case for SEL

Just as early childhood advocates frequently cite the economic case for early learning, proponents of SEL shouldn’t shy away from making the case that teaching social-emotional skills to young children makes good business sense. There are a lot of important reasons for teaching these skills starting at a young age and the fact that these skills will make it easier down the road for students to succeed in the workplace is a fact worth highlighting.