Maternal Mortality Rates in the U.S. Are Shockingly High, Especially for Black Women 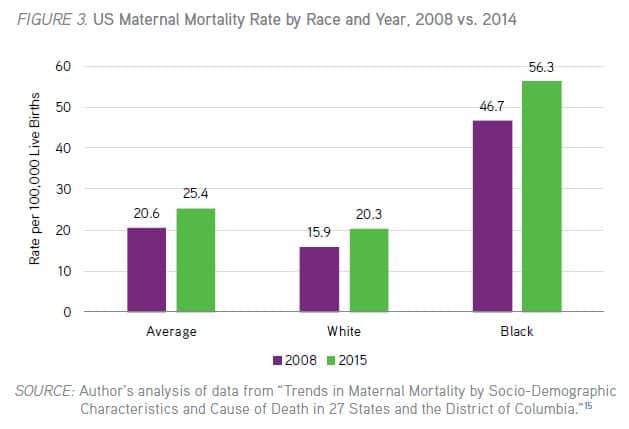 According to the report, the increased mortality rates for black women aren’t related to education attainment or income.

“For example, in a study conducted in New York City, college-educated black women were nearly three times more likely than white women who had never graduated from high school to die during pregnancy or up to one year after childbirth. … ‘Weathering’—a term coined by public health researcher Arline Geronimus to describe the effects of increased levels of stress on women of color due to the perpetual need to anticipate and manage racism—is thought to explain some of this disparity…”

Ensuring Black Women Are Aware of the Risks

SELF Magazine has recently launched a series on black maternal mortality. According to digital editor Leta Shy, a black mother who experienced her own complications after childbirth, the goal of the series is to give black people who are already pregnant or thinking of becoming pregnant as much information as possible about black maternal mortality and morbidity.

“The objective isn’t to scare you,” Shy writes, “but rather to help us all understand what we are working against—and in so doing, maybe help each other out a little bit. Because there’s strength in our numbers, and this public health crisis needs all the attention it can get.”

The first three articles in this on-going series are already available:

“Allyson Felix Wants to Save Black Mothers.” The most decorated female track and field athlete in the U.S. history has a message for black women.

“We Asked All 2020 Presidential Candidates Their Plans to Address the Black Maternal Mortality Crisis.” Black moms are dying. Here’s what politicians—on both sides of the aisle—had to say about it.

“11 Health Conditions You Should Know About If You’re Black and Pregnant.” Sometimes knowledge really can be power.

What Are We Doing About Maternal Mortality Rates?

Following last year’s passage of HB 4133, Oregon established its own Maternal Mortality and Morbidity Review Committee, the first step toward understanding maternal mortality and its causes in Oregon and shaping strategies to address it. According to the United Health Foundation, Oregon’s maternal mortality rate increased from 13.2 deaths per 100,000 births in 2016 to 13.7 in 2018. (There is no state data disaggregated by race available.)

ProPublica: “Nothing Protects Black Women From Dying in Pregnancy and Childbirth“

The New York Times Magazine: “Why America’s Black Mothers and Babies Are in a Life-or-Death Crisis“

Providence Health & Services: “Why Are Maternal Mortality Rates on the Rise?“