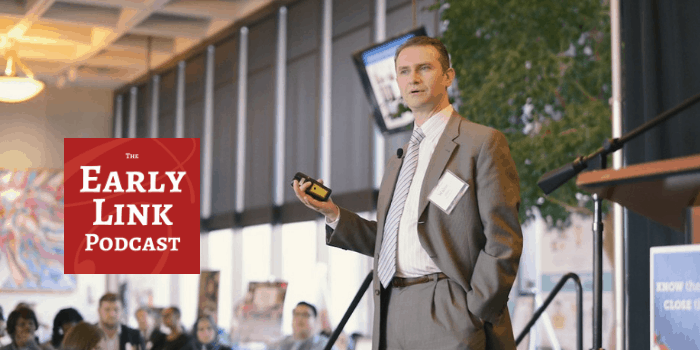 Dr. Walter Gilliam joins us in Portland for a discussion on preschool suspension, expulsion, and implicit bias. He is professor of child psychiatry and psychology at the Yale University Child Study Center, and the director of The Edward Zigler Center in Child Development and Social Policy. He coauthored the book A Vision for Universal Preschool Education, and his groundbreaking study from 2005 called “Prekindergarteners Left Behind” examined expulsion rates, and reasons for expulsion, in state preschool programs across the country. His scholarly writing addresses early childhood care and education programs, school readiness, and developmental assessment of young children, and he is frequently consulted by decision-makers in the U.S. and other countries on issues related to early care and education.

Learn more about implicit bias, preschool expulsion, and what is being done about the issue at the state level: What We Talk About When We Talk About Preschool

Rafael Otto: [00:00:00] This is the Early Link Podcast. I’m Rafael Otto. Dr. Walter Gilliam joins us for discussion on preschool suspension, expulsion, and implicit bias. He is professor of child psychiatry and psychology at the Yale University Child Study Center and the director of the Edward Zigler Center in Child Development and Social Policy.

He co-authored the book, A Vision for Universal Preschool Education and his groundbreaking study from 2005 called “Pre-Kindergarteners Left Behind” examined expulsion rates and reasons for expulsion in state preschool programs across the country. His scholarly writing addresses early childhood care and education programs, school readiness, and developmental assessment of young children.

And he is frequently consulted by decision makers in the US and other countries on issues related to early care and education. Walter, welcome to The Early Link Podcast.

Rafael Otto: [00:00:52] Excellent. Excellent. One of the first questions I wanted to ask you was how you first became interested in studying preschool suspension, expulsion. I know there’s some background to that and I would love it if you could share a story or two.

Dr. Walter Gilliam: [00:01:05] Well, that’s a great question. Um… there is a backstory to it. This was back in 2002. I was at Yale then as a faculty member and doing research but also supervising child psychiatrists and child psychologists and pediatricians who are learning how to work with young children. And so I was on the other side of one of those two-way mirrors – you know what I’m talking about… actions on the one side, and then I’m on the other side and I’m watching, and then I can give them feedback on how well they’re working with the young child, and then sign off for billing purposes.

I couldn’t help but notice that many of the children who are being referred to our clinic for an evaluation were being sent to us because they’d been kicked out of a preschool program or expelled from a childcare program or they were told that if they didn’t come to a place like Yale and get an evaluation that they will be expelled from the program.

And I couldn’t help but notice just how many children this was true for. And I didn’t know if this was a Connecticut phenomenon or this was just something that was happening around the New Haven, Connecticut area. So I decided to take a look at the research on it and found absolutely nothing.

It was a survey that was taking place over the phone. It was about an hour long. We just had a few questions on the expulsion but the findings were just so staggering to so many people that it literally became the study.

Dr. Walter Gilliam: [00:02:42] Yeah, absolutely. Well, at the time we had No Child Left Behind legislation, which was the hot topic. So it was a bit of a play on the title. In terms of the fact that we are leaving kids behind and we leave them behind before they even get there. For many people when they think of school they think of school as beginning in kindergarten, but not anymore. We have preschool programs for children four years old or three and four years old and you know the concern here for us with phenomena like this, of children being expelled from preschool programs, is this notion of the fact that for many of our kids they can experience a failure before they even get to what most people would consider school.

Rafael Otto: [00:03:16] Talk a little bit more about that study because you found some fairly significant things related to the expulsion rates for preschool as it exceeded the expulsion rate for kids in the K-12 system.

Dr. Walter Gilliam: [00:03:29] Well, when we got the rates back we found that 10% of the preschool teachers… Now bear in mind these are state funded preschool programs; this is not your typical childcare programs. These are your better resourced early care and education programs that are part of state systems, usually run out of state Departments of Education and are funded through state Departments of Education. So they have actually more resources to them than most of your regular child care programs. And in these programs, the teachers were telling us – 10% of them – that they had expelled at least one child in the past 12 months. Now, expelled meant permanent. Permanently, totally, kicked out of the program. 10% of the teachers said that they had done this and we knew how many children had been expelled and we knew how many children were in their classrooms, and so with some simple division we were able to figure out what the rate was. But then when we had the rate it was kind of hard to figure out how to communicate that. The rate was 6.7 expulsions per thousand children enrolled. So at 6.7 is that a lot, is that a little or is that like baby bear and it’s just right? You know like, what do you do with that? So we thought, “Well, you need to have something to compare it to.”

So we thought K-12 expulsion rate would be the best thing to compare it to. But we couldn’t find anything published on the K-12 expulsion rate except that the US Department of Education’s Office for Civil Rights had conducted surveys on expulsion and suspension in K-12. But, they never analyzed the data. Instead, it existed as 16,000 databases. One for every school district in America on the US Department of Education’s website. So we downloaded all 16,000 and wrote our own formulas to figure out what the rates were state by state and nationally. And then when we compared the rate we found that preschoolers, three and four year old children, were being expelled at a rate more than three times that of grades K through 12 combined in the United States. And when you look at it state by state, all but three states have an expulsion rate in preschool that outpaces the expulsion rate K-12. That’s a lot of kids being expelled.

Rafael Otto: [00:05:24] You also found that boys were much more likely to be expelled than girls?

Rafael Otto: [00:05:44] Tell me how those findings came out and what else should we know about that study?

Dr. Walter Gilliam: [00:05:49] In the original study, we were curious about things like what kind of programs are the ones doing the most expulsion and then also what types of children were the most likely to be expelled. And like you said, we found that in mixed age groups where you have three- or four-year-old children together, the older child is more likely to be expelled. We found that boys were expelled at about four times the rate of girls, and Black children were expelled about twice the rate of every other demographic of children.

And so when you think about it, there’s really three expulsion risk factors. You have “big,”
the bigger children, “the boys,” and “the Black children” – big, black, and boy. And the more of those that existed within a single child, the greater the likelihood that that child might be expelled from the program. But that just tells us about which children were most at risk. And then there’s other factors too that have to do with what types of programs were more likely to be the ones doing the expulsion. When we did the pilot study for this, we piloted it in child care programs in Massachusetts and we found that one teacher reported expelling six children out of a class of 16 in the course of 12 months. It’s almost half the class. It’s amazing, isn’t it?

Dr. Walter Gilliam: [00:06:57] The rate’s much, much, much higher than what a lot of people would have thought and certainly even more so for our Black children and for our boys. We didn’t know what to do and how to understand the finding about four-year-olds more likely than three-year-olds. CBecause I could’ve made a guess either way on that. I could have guessed, well maybe the bigger child. I could have guessed, well maybe the younger child who might be more socially immature in the classroom. And so what we did was we pulled together a group of preschool teachers similar to the ones in the national study and we said: “In a national study this is what teachers like you said, why do you think they would say this?” And the teachers thought about it in this focus group and they came back and they said, “Well you know it’s one thing If you have a child who’s this big you know and they held their hand about waist high… and they said it’s another thing If you have a child who’s this big and they held it a little bit higher.”

And so we asked the logical follow-up question of why does height matter. Like how does height factor into who you’re going to expel or not expel? And they said, “Well if the child is smaller, then the child might be smaller than the other children, but if the child is bigger then the child might be bigger than some of the other kids in the classroom and then maybe someone will get hurt.” And that was an important clue to us that it makes a lot of sense because the teacher is not just concerned about the singular child. The teachers has to be concerned about all the children in the classroom. But if you listen really closely to what the teacher’s saying, what the teacher’s saying is this: it’s not the behavior of the child. You can have two children equally aggressive, but the bigger child’s going to be the one to be expelled. So it’s not really the behavior of the child. It’s what we make out of that behavior. It’s what we assume might happen as a result of that behavior. And that’s when it became clear to us that preschool expulsion isn’t really a child outcome. Preschool expulsion is not a child behavior. It’s an adult decision that may be based in part on the child’s behavior but there could be other factors, too, that could come into play having to do with how that teacher views that child.

For the complete transcript, please download the pdf below.