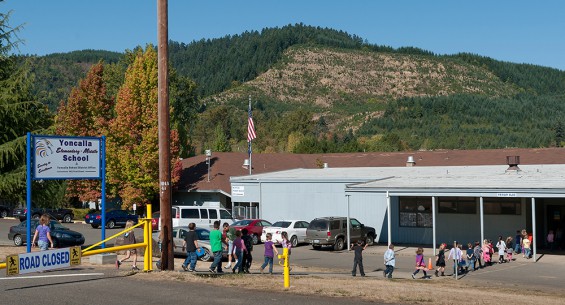 It is a game changer because high-quality preschool effectively prepares children for kindergarten and school achievement and is a key component of early childhood education.

It is also a game changer because when Yoncalla Early Works began four years ago, parents said in a survey that they did not want preschool. Yet after a series of meetings this spring, it was Yoncalla parents who pushed the district to open a preschool for 4-year-olds with money from the new state program, Preschool Promise.

The growth in parent involvement, leadership, and trust in the school district has been Early Works’ most significant development and led directly to parents’ quest for a preschool, says Jan Zarate, superintendent of Yoncalla School District.

Parents “initiated the desire” for preschool after studying what it meant to be ready for kindergarten, she says. “They started looking at what does it look like to have social readiness and to be math ready and reading ready.”

Parents and educators hope and expect the preschool will help prepare all Yoncalla 4-year-olds for kindergarten and school success so teachers no longer have to play “catch up” in kindergarten and the early grades, Zarate says.

Kelli Stevens, 27, of Yoncalla, who serves on the preschool committee, says she hopes the class will help her 4-year-old daughter, Adriana Grable, interact socially with other children and learn numbers, letters and other fundamental skills that will prepare her for kindergarten.

“It is an amazing opportunity for children in the area,” she says.

The preschool opens in a classroom of what Yoncalla Elementary calls its birth-to-four or B-4 Building, where there are also rooms for the federal Early Head Start program and for Early Works family engagement efforts such as play groups for young children. The building this year has added a community engagement room, where Early Works partners such as the North Douglas Family Relief Nursery or the Douglas County Early Childhood Planning Coalition can offer parenting classes and other services.

To pay for the preschool, Yoncalla along with neighboring school districts applied through the South-Central Oregon Early Learning Hub for money from the Preschool Promise initiative, a program passed by the 2015 Legislature after a strong push from Children’s Institute and its partners, including the Oregon Early Learning Division, Oregon Health Authority, and Oregon Head Start Association. The state program, operated by the Oregon Early Learning Division, gave Yoncalla $12,500 for each of 16 preschool students, and the school is paying to add four more students with money from other Early Works partners, grants and federal sources.

The preschool must meet state standards for quality, which require one adult for every ten children and lead teachers with a bachelor’s degree (or a plan to attain one) in early childhood education or related field. The preschool will provide a bus, offer children breakfast and lunch and operate six hours a day, Monday through Thursday. Yoncalla hired two preschool teachers and will also provide a classroom assistant.

One teacher will be Cassie Reigard, a lifelong Yoncalla resident who has been operating a private preschool in Yoncalla that was started by her grandmother and later run by her mother. Reigard charged only $60 a month for the preschool, but many parents couldn’t afford even that. Now she will earn a regular teacher’s salary, and parents can send their children to the public preschool for free.

Also teaching will be Megan Barber, who grew up in Yoncalla, has two young children, has degrees in early childhood education and has worked recently as program manager and preschool teacher for North Douglas Family Relief Nursery. Barber hopes the school becomes a model that draws educators from across the state.

“I really want to make this the very best preschool in Oregon,” she says.

Christina Mast, 32, a lifelong Yoncalla resident, knows as a third- and fourth-grade teacher at Yoncalla Elementary how valuable preschool will be for its students, who will include her twin daughters. She also expects the preschool will mean that more students will eventually be reaching her classroom better prepared.

“It will be a huge, positive effect,” she says.

Early Works’ focus on engaging parents in their children’s education has had “a positive influence and ripple effect” in the neighboring school districts of Elkton and North Douglas in Drain, says Zarate. The three districts, for example, are collaborating on a program sponsored by The Oregon Community Foundation and other foundations called P-3 (prenatal through grade three) Alignment, to help connect families and early childhood providers to schools.

Similarly, the three districts worked together to apply for funding for Preschool Promise. So Elkton and Drain schools also will each be offering a preschool class this fall for nine students.

Public preschools are rare in Oregon, particularly in low-income rural areas like North Douglas, where 44 percent of the 5,000 residents live below 200 percent of the federal poverty level and half of the children qualify for government subsidized free and reduced-price meals.

But what seemed impossible and not even a goal four years ago has become a reality for Yoncalla and its neighbors. Parents and educators already are raising their sights for next year.

“There may be a chance to grow here,” says Zarate, “We could look at a 3-year-old class.”