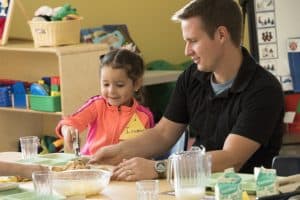 Gwyn Bachtle, an Early Learning Specialist in the Early Learning Division described the visionary goal of the new program as, “having children in programs that are quality-rated…and really working to increase the capacity of our communities.”

An award team, composed of state executive staff and three Early Learning Council members, reviewed applications from Early Learning hubs around the state. The hubs will be responsible for contracting with local providers and implementing the new preschool programming in their communities. Applications were evaluated based on demonstrated need; the capacity to support a mixed-delivery model; and the capacity to support high-quality preschool programs.

In total, ten hubs submitted a total of seven applications (one application was a joint application including multiple hubs) – with their combined requests reflecting the preschool needs of more than 2,600 children. Five of the seven applications were approved for funding, and these hubs will be working with the Early Learning Division closely in the upcoming weeks and months – gaining technical assistance and finalizing contracts with providers.

The Preschool Promise announcement is, as Molly Day, Early Learning Multnomah Director says, “a big deal. The state is deciding to invest in preschool, for its residents who are furthest from opportunity. Families in poverty, families that aren’t being served now…it is a lot of change all at once, and that makes it challenging, but it is a wonderful opportunity.”

“We hope this is just the beginning,” says Dana Hepper, Children’s Institute Director of Policy and Program. “There are many disadvantaged Oregon children who still lack access to high-quality preschool.” In fact, three-quarters of Oregon’s young children still don’t have access.

“The Children’s Institute is supporting the state to ensure successful implementation of Preschool Promise,” Hepper says. “We look forward to seeing the program grow.”

END_OF_DOCUMENT_TOKEN_TO_BE_REPLACED

“We can’t wait,” A Conversation on Oregon’s Literacy Crisis with Angela Uherbelau

On this segment of The Early Link Podcast, host Rafael Otto talks with Angela Uherbelau, founder of Oregon Kids Read, a grassroots literacy and equity group dedicated to ending our state’s literacy crisis.