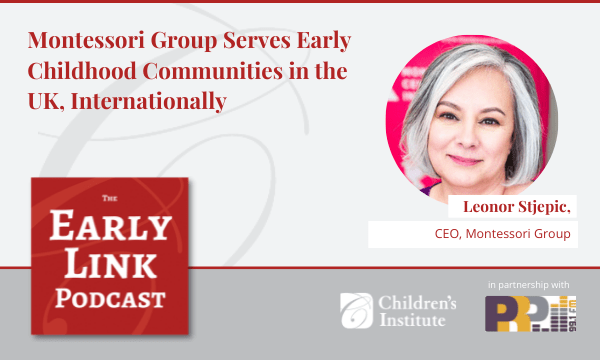 This week, host Rafael Otto speaks with Leonor Stjepic; an award-winning social enterprise entrepreneur, whose career has spanned both the private and nonprofit sectors in the United Kingdom. In addition, she is currently the chief executive officer for The Montessori Group, an organization that provides training in Montessori education for early years communities in the UK and internationally.

An award-winning charity entrepreneur, Leonor Stjepic’s career has spanned both the private and charity sector. Since 2007, Leonor has been the CEO of RAFT – an award-winning medical research charity.

During her time at RAFT, the organization became the first UK charity to create an Enterprise Investment Scheme company and the model is widely praised as a case study in how to de-risk social investment. Leonor is also the Chair of London Fire Brigade Enterprises and was previously CEO of Smart Matrix Ltd. In 2016, the ACQ5 Global Awards named her as ‘UK Gamechanger of the Year’ and a year later, Leonor was named as the ‘Most Innovative CEO in the Not-For-Profit Sector’ by Business Worldwide.

In this podcast, Leonor discusses what makes Montessori education unique, as well as important facts about the woman behind it, Maria Montessori. She also talks about her advocacy work surrounding proper investment in early childhood, as it is an area with the least government investment. She then speaks to the reasoning behind it, and follows up with what this investment in early childhood development looks like on an international level.

Additionally, she shares how she makes her most effective case to policymakers and legislators for investing in the early years. As far as long-term goals, Leonor is most interested in funding research, supporting teachers, and strengthening higher education*. She further details what all of these look like on this scale, and what is needed to obtain them, as well as the importance of The Montessori Group’s global social impact partners.

Leonor closes by telling of an important time in her life when she was working with young children in a Balkan refugee camp. These particular moments stuck in her memory, and these children inspired her to undertake the work she does today.

*Soon to have the UK’s first Undergraduate, Master’s and PhD courses in Montessori education in partnership with Leeds Beckett University.

Rafael Otto: [00:00:00] This is the Early Link podcast. I’m your host Rafael Otto. Thanks for tuning in. As usual, you can catch us on 99.1 FM in the Portland metro on Sundays at 4:30pm or tune in at your convenience, wherever you find your podcasts.

Today, my guest is Leonor Stjepic. She is an award-winning social enterprise entrepreneur, whose career has spanned both the private and non-profit sectors in the UK; and she is currently the chief executive officer for the Montessori group, an organization that provides training in Montessori education for early years communities in the UK and internationally. Leonor, it’s great to have you here today.

So the approach is something that helps children develop their potential. It treats each child as unique. All these things sound sort of commonplace now, but this was revolutionary at the time and it’s very strong on teaching, not only numeracy and literacy. But also on those social-emotional skills that are essential to first of all, develop as a human being, but secondly, are going to become really important as the way that we work changes. And I’m sure we’ll talk about that later. The Montessori Group is a global organization. We don’t own Montessori schools, but we do support Montessori schools, educators, children. At the heart of everything we do is social impact.

Maria Montessori started her first school in the slums of Rome. And we follow that legacy of trying to bring education and particularly early years education to the most underprivileged in our communities. Whether that’s disadvantage through economic factors,  social factors, whatever. We want to ensure that every child has the opportunity to have an excellent education and actually reach their full potential.

Rafael Otto: [00:02:26] Maria Montessori was a pioneer in many ways. One of the things that I read about her recently is that she, more than a hundred years ago or 120 years ago, she fought for equal pay for equal work, which was revolutionary at the time and in some ways, still is today. What else do you want people to know about her?

Leonor Stjepic: [00:02:46] Well, she was, I mean, she spoke in 1896 at the first congress for women’s rights in Berlin. Even before she actually developed her pedagogy, she was already thinking about that. She was one of the first women to actually become a doctor in Italy. Going against what would have been the sort of societal norms at the time where sort of, well, you know, brought up young ladies did not go into work, let alone something like being a doctor.

And there’s a story that when she was actually studying medicine, the male students refused her access to the anatomy classes. So she actually had to learn anatomy by going into the morgue late at night. Which is, you have to sort of think that’s one very strong woman to sort of say, “Right! Well, I’m going to do that and I’m going to show them that I can actually sort of graduate as a doctor.” So she worked with Mahatma Gandhi. They were friends. So her writings on peace, she wrote a series of lectures in 1947, having experienced two world wars, about peace education. She talked about sustainability even before it became fashionable or even recognizable as an issue that we should actually be mindful about.

She really was way ahead of her time. I had a very interesting conversation yesterday with someone who was explaining to me that now neuroscience proves that virtually everything that Maria Montessori said about child development is true.  It can now be proved through neuroscience.