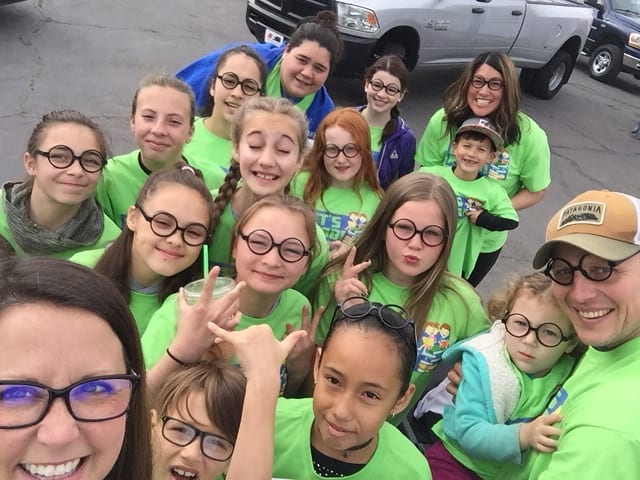 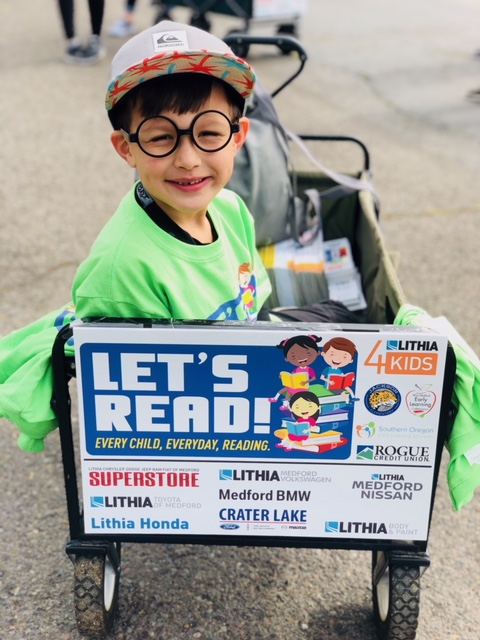 Principal Kelly Soter of Jackson Elementary in Medford, Oregon continually looks for ways to promote reading for her community’s youngest learners. This year, she pulled together a team of volunteers to participate in the annual Pear Blossom Parade held on April 14 to promote her “Let’s Read” campaign.

Several years ago, Soter was inspired by attendees at a Campaign for Grade-Level Reading conference who had built similar campaigns to increase reading at home. “One community had developed a ‘Let’s Read’ campaign to encourage parents to read with their children. The campaign developed partnerships with schools, libraries, and community-based organizations, and messaging appeared throughout the community,” Soter said. “Another community substituted books for candy at a local parade and gave books to kids and families.”

Soter pulled the two ideas together, contacted partners and sponsors for help, started a book drive, and worked with Scholastic to purchase low cost books for kids ages zero to five. They collected 2,500 books to give away at the parade and stuffed them with flyers promoting play and learn groups at Jackson Elementary and story time at the library.

Held every year since 1954, the parade celebrates spring blossom season in the Rogue Valley. About 4,000 people participate in the parade with an audience of nearly 30,000. “I thought the parade would be a great way to spread our message about the importance of having adults read with young children every day,” Soter said.

Ten fifth and sixth graders from the student leadership group at Jackson Elementary volunteered to give out books at the parade. Staff from the school and from Lithia also volunteered, and some brought their own kids along to help.

“We ran out of books half way through the parade! So many people loved the idea and wanted to take a book home with them,” Soter said. “We could easily have given away 5,000 books.”

“Let’s Read” is also designed to give books to kids before summer to stimulate reading at home and help prevent Summer Slide, a well-documented loss of skills during the summer months when kids are out of school. This year, Jackson Elementary students in kindergarten, first, and second grades will get to choose six Scholastic books. The books, along with a backpack and ideas for summer reading activities, will be ready for kids in early June as the school year winds down. Soter said that focusing on those grades is designed to get kids reading proficiently by third grade, a key indicator for success throughout school and a predictor of high school graduation.

“We want kids to be excited to read, and we want more parents reading with kids all summer long. Families will also get reminders from me during the summer by email, phone, and text,” Soter said. “After that we’ll want to capture data to see if our efforts pay off.”

Watch the video about the “Let’s Read” campaign

“We can’t wait,” A Conversation on Oregon’s Literacy Crisis with Angela Uherbelau

On this segment of The Early Link Podcast, host Rafael Otto talks with Angela Uherbelau, founder of Oregon Kids Read, a grassroots literacy and equity group dedicated to ending our state’s literacy crisis.

END_OF_DOCUMENT_TOKEN_TO_BE_REPLACED

Join us for a Preview of Right to Read!

Join us on Thursday, July 21, for a preview of a powerful new documentary called Right to Read. The film explores America’s literacy crisis and what to do about it.