Preschool teacher Andreina Velasco knows at least several of her students at Earl Boyles Elementary are from homeless families who have moved in with friends or relatives while they struggle to find a home. Sometimes she sees the stress of unstable housing reflected in children’s restlessness and lack of focus in class.

Homelessness has grown worse over the last three years at Earl Boyles and throughout East Portland and Multnomah County as the area population grows, gentrification pushes to the metro outskirts, rents rise and available and affordable housing grows scarce. 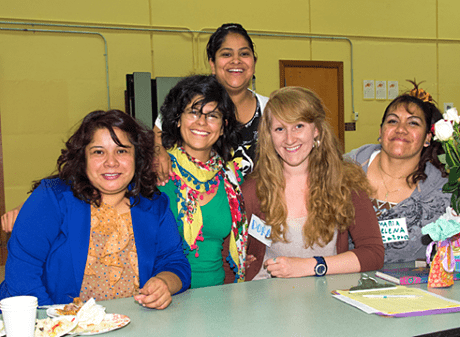 Children thrive on routine and consistency, Velasco says, but it is hard for parents without stable housing to provide that. “They see their parents having a difficult time,” she says. “It definitely has an emotional impact on them.”

The scope of the housing crisis for Earl Boyles’ families became apparent last year after the Children’s Institute surveyed 83 of them and found three in four had seen a rent increase over the previous year averaging $95 a month. A third of families were relying on help, mostly from relatives and friends, to pay rent.

Children’s Institute is concerned housing disruptions can create emotional, attendance and behavioral problems for children and have a negative impact on early learning and school success. Engaged with Earl Boyles through it’s Early Works initiative, a partnership that involves more than a dozen Southeast Portland organizations, the institute this fall teamed up with additional agencies to offer a housing assistance program. Home Forward, the housing authority for Multnomah County, pledged $175,000 for each of two years to provide short term rental assistance to Earl Boyles families.

But even with that money, the severity of rent increases and scarcity of affordable housing has made it difficult to put families in permanent housing, says Rachel Langford, education and youth initiatives director for Home Forward.

“We are just not serving as many families as we hoped to be serving at this point,” she says.

As of late February, the housing program launched last fall had helped three families with short term rent assistance, helped another half-dozen families avoid eviction, and was responding to six homeless families seeking housing and to 10 referrals for other families needing help, says Langford. The program is funded to serve about 50 families per year, and its leaders believe they are not reaching many families in need.

The program is based at Earl Boyles and run by a director working through Portland’s Immigrant and Refugee Community Organization, which is on contract with Multnomah County. Those receiving housing help must live within the Earl Boyles enrollment area and have gross annual incomes below 50 percent of the area median income, $36,650 for a family of four.

The programs’ short term rent assistance can help families get settled into apartments. But some families “are reluctant to sign on to short term relief with our assistance if they can’t sustain it” after the subsidy ends, Langford says.

Finding affordable housing also has become more difficult because the tight market allows landlords more options to raise rent, remodel and turn to higher-income renters. Larger families, with three or more children, are finding that landlords will not accept them for two-bedroom apartments as they may have in the past when they had higher vacancy rates, says Marina Merrill, senior research and policy advisor for Children’s Institute. Three bedroom apartments are uncommon, and even with rent assistance, largely out of reach for low-income families, she says.

Given the complexities of placing homeless families in permanent housing in this rental market, the Earl Boyles housing program has started doing more eviction prevention to help families who have housing keep it. As rents climb, many families are spending a growing share of their income on rent. The non-profit Community Alliance of Tenants (CAT) has seen renters in East Portland pay a majority of their income on housing for fear of being left homeless, says Christina Palacios, senior organizer. Residents are financially squeezed when their rents climb above 30 percent of their income, yet the Portland Housing Advisory Commission reported that 28 percent of households in Portland in 2016 were paying half or more of their income on rent, Langford says. Families overburdened by rent often rely on food banks for groceries or have their children bring home leftovers from school lunch programs, Palacios says. Some families double up and share an apartment, but that’s dangerous because it gives landlords grounds for eviction, she says.

Housing has always posed a challenge for low-income families, but it has become so rare and expensive that the City of Portland declared lack of affordable housing an emergency more than a year ago. Rents in the metro area have climbed by 63 percent over the last decade while salaries increased by only 39 percent, according to the National Low Income Housing Coalition. In East Portland, rents climbed 13 percent in 2016 alone. Available housing, the national coalition reports, falls short by 36,000 units in Multnomah County and by 63,000 for the Portland metro area for families with incomes below 50 percent of median family income.

A federal count in 2015 found about 3,800 people living on the streets, shelters or temporary shelters in Multnomah County and another 12,000 jammed into homes with other families.

A growing population and gentrification has been pushing low-income residents to the outskirts of the metro area for more than a decade. A decline in federal housing funding, a state ban on rent control, few regulations on no-cause evictions and unfair renting practices have all contributed to the housing crisis, say housing authorities.

“We’re seeing some landlords evict whole buildings and flip (remodel) them,” says Ruth Adkins, policy director for the Oregon Opportunity Network, a nonprofit association of 150 affordable housing and community development groups. “People in the entire building are out on the street in short order.”

CAT is providing classes for tenants to help them know their rights and lobby government officials for more protection. The agency last summer provided about 20 Earl Boyles parents with lessons on renters’ rights, fair housing, lobbying and the eviction process, Palacios says. Further, some middle class residents are beginning to feel the squeeze of rising rents and are pushing for action, says Adkins.

Tenant advocacy efforts are paying off. Portland will spend $258 million to build and preserve hundreds of affordable apartments for its poorest residents after a large majority of voters last November approved a bond levy for the initiative. In December, the Portland City Council unanimously approved an inclusionary zoning policy that requires apartment and condo developers to set aside 20 percent of their units as affordable housing for residents who earn less than 80 percent of the median family income. The policy includes tax waivers and other financial incentives in exchange for the inclusion of affordable units within new housing projects.

In February, the council approved an emergency measure that requires landlords to pay between $2,900 and $4,500 in moving costs to tenants they evict without cause or who are forced to move because of rent increases of 10 percent or more over a 12-month period. The Oregon Legislature also has pushed the housing crisis in Portland and across the state to the top of its 2017 agenda.

Housing relief cannot come too soon for low-income parents at Earl Boyles and throughout the metro area who want to see their children focus on learning rather than on where they are going to sleep at night.