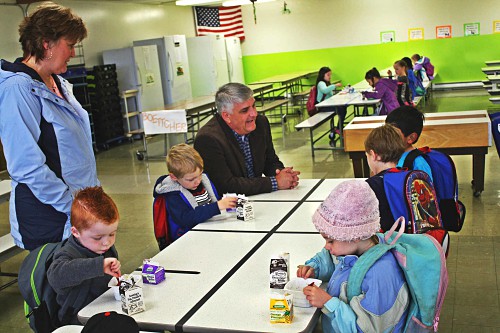 But today that school is thriving as the Lincoln School of Early Learning, bursting with preschool, kindergarten and other early childhood education programs and adding a building to make room for even more children.

Superintendent Tim Sweeney and his staff still marvel over how they managed to pull this off.

“You would be stunned with what you are able to do when you start  taking the steps,” says Sweeney. “This can happen anywhere.”

Indeed, the Children’s Institute through its Early Works program has helped two unlikely elementary schools – Earl Boyles in East Portland and Yoncalla in the hills south of Eugene — launch robust early learning programs over the last five years. Lincoln Elementary, like Earl Boyles and Yoncalla, is in a district that enrolls a high proportion of children from low-income families. Yet all of these schools found innovative ways to offer preschool and other services by teaming up with other organizations, both public and private, that serve young children.

They all see that by investing early in education, they can reduce future costs that come with remediation and school failure. Early education prepares children for kindergarten, improves their school success and can prevent the achievement gap that so often leaves poor kids behind. 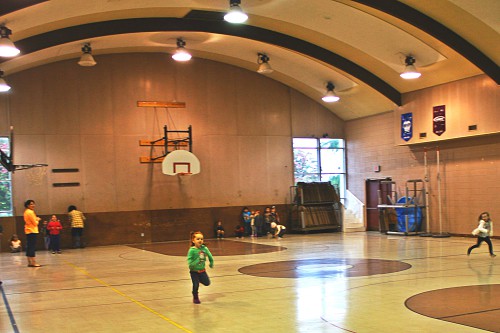 Teacher Angela Dixon’s preschooler runs off some energy with relay races during recess.

The three-year olds in Lincoln’s two preschool classes take Friday’s off while the four-year olds spend time in the classroom and on the playground with the kindergartners, a practice that allows them to easily advance and adjust to kindergarten.

Angela Dixon, who is completing her second year teaching the preschool classes, says children are learning their numbers, letters, how to write their names and social skills.

“I love it,” says Dixon, who is earning a college degree in early learning. “The rewards are watching them grow. I’m seeing amazing growth.”

One room that has been used by the school board for its meetings has been converted into a child development center that opened in April to provide structured child care to two- and three-year olds. The center introduces children to books and basic learning and social skills. Holli Henthorn, the coordinator, sometimes has her husband, a local policeman, come in uniform to read to the children.

The center, which charges parents $3.60 an hour, is open from 7:15 a.m. to 5:45 p.m. so children from the preschool and primary classes can come before and after school while their parents work.

“It is a great opportunity not only for me, but for the community,” says Henthorn, who grew up in Coquille. “There is a need for it in our little community. People need options, and there isn’t much here for them.” 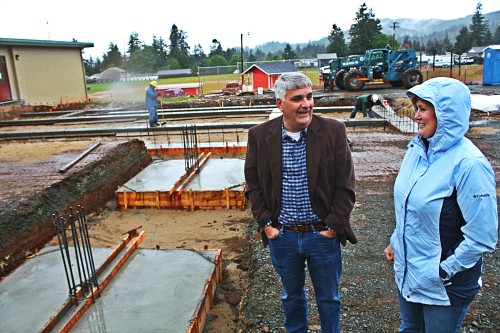 Sharon Nelson, principal of Lincoln School of Early Learning, and Tim Sweeney, superintendent of Coquille School District, survey the foundation for a new $600,000 building addition that will become a child development center to serve about 60 children.

Outside, the foundation is taking shape for a $600,000 addition that will expand the child development center to accommodate about 60 children. The money was raised locally through donations and represents the first new school building in Coquille since 1979.

“It gives people hope,” says Sharon Nelson, principal of the Lincoln School of Early Learning. Nelson attended first grade in Lincoln the year it opened in 1961. She formerly taught health and physical education at the high school and was later principal there. Henthorn was one of her students.

While the district is trying to give its young children a solid early start in learning, it also wants to give them social and emotional support, Nelson says.

“We are trying to look at the whole child,” she says. “It is not just academics we are focused on.”

Nearly all of Coquille’s students are economically disadvantaged. About 60 are homeless and in temporary housing. Nearly half qualify for free- and reduced-price lunch. The school board has chosen to provide three free meals a day — lunch, breakfast and dinner — to every student in the district five days a week.

Sweeney says the germ of Coquille’s leap into early childhood education was planted one morning in 2012 when a high school junior girl came to him with a problem. Her mom had just been promoted from night to day manager at a local fast-food restaurant. But because of prohibitive childcare costs, the promotion would require the daughter to watch her 3-year-old sister and complete her senior year of high school at home by taking online courses. The teen wanted to complete her senior year at school.

The girl’s request sparked an idea that prompted Sweeney to assemble his administrative team and pose some questions about their financially-ailing Lincoln Elementary.

Over the next year, though not in time for the high school senior, the district would do that and more. It invited Head Start and Early Head Start to set up their operations in the school. It invited the South Coast Education Service District to move its early intervention program for young children with special needs into Lincoln. It expanded kindergarten from half- to full-day and hired a teacher for two half-day preschool classes. To pay for the teacher, the Coquille High School principal agreed to give up his counselor.

The principal said he understood, recalls Sweeney, “if you can close the achievement gap early enough, you are going to send me a different kind of high school student.”

By fall of 2013, Lincoln Elementary was again full of children, and Sweeney was delivered from his dread of being “the person closing the last elementary school in the district.”

Sweeney previously worked three years in southwest Oregon as Superintendent of Butte Falls School District and principal of its two schools. In 2010, he arrived at Coquille to oversee its three schools: a high school, a middle school oddly arranged with grades three through eight, and Lincoln Elementary, with grades Kindergarten through two.

Coquille, the Coos County seat named after a Native American tribe, spreads above a valley northeast of Coos Bay on the bank of the Coquille River in the foothills of the Coast Range. As statewide, 87 percent of its 3,850 residents are white. The 15 percent living in poverty is slightly less than the 17 percent statewide, but the median annual household income in Coquille falls significantly below the Oregon average, $32,500 compared to $51,200. As statewide, 88 percent of Coquille’s 2,060 adults between the ages of 25 and 64 have completed high school, but only about 10 percent of them have a bachelor’s degree or higher.

Back in the 1960s and 1970s when the Coquille area had four lumber mills and lots of dairy farms serving the nearby Bandon cheese factory, the school district enrolled 2,200 students. Over the next three decades, three mills, the cheese factory and most of the dairies closed and enrollment dropped to about 850 by the time Sweeney arrived in 2010.

Angela Dixon leads her preschoolers as they count to 100 while the numbers flash on a video screen.

But after the district opened Lincoln Elementary as an early learning center, parents who had been schooling their children at home, online or elsewhere, began sending their children back. They liked the new school organization that put children in grade one through six in one school and those in seven through 12 in the middle and high school, and they loved the opportunity to send their children to preschool and all-day kindergarten. Coquille’s enrollment quickly climbed to 1,050. And with those additional children came funding to the tune of $11,764 per student.

Jessica Tibbitt, 23, recently moved to Coquille from Virginia and was pleasantly surprised to learn a public preschool was available within walking distance of her home. She says her son, Harry Walker Jr., 5, has already made progress in learning letters and numbers. “He knows things,” she says.

On one May morning, Tibbitt brings Harry’s pet rabbit to Dixon’s class for show and tell. When she arrives, the students are acting out letter sounds to the beat of a video shined on a big screen. They run in place and shout R, pretend like they are surfing as they make the S sound, and hush for the Q sound of quiet. Then the students sit, and with Tibbitt at his side, Harry takes center stage to show off his rabbit, which he holds in his lap.

“Do you pet him?” asks one student.

“I pet him every day,” says Harry.

Coquille’s first class of preschoolers is now in third grade, the earliest grade at which the state tests for reading, math and science. So Coquille will soon have its first indication of whether the preschool is making a difference in academic achievement.

“They say, ‘Wow, what a great group of kids you sent us,’” Nelson says “We’ve heard that twice.”

Holli Henthorn, coordinator, and assistant Michelle Etienne talk during a snack break in the child development center, which used to be the meeting room for the Coquille Board of Education.

The district is now using some of the state money it gets from Measure 98, the High School Graduation and College and Career Readiness Act of 2016, to train high school seniors to assist Dixon in her preschool classes, for which she now has one assistant. The district also plans to invite senior citizen volunteers to help. The Lincoln Early Learning Center is evolving into a community center that will bustle with people from ages 2 to 80, Sweeney says.

The district’s venture into early childhood education has been challenging, and it would be much easier to remain a K-12 district, the superintendent says. But the change has brought new energy and hope to a district after a long decline.

The early learning program “keeps us engaged,” he says. “It keeps you coming to work every day. It keeps parents engaged….It has allowed us to be so much more creative.”

Listen to our interview with Superintendent Tim Sweeney