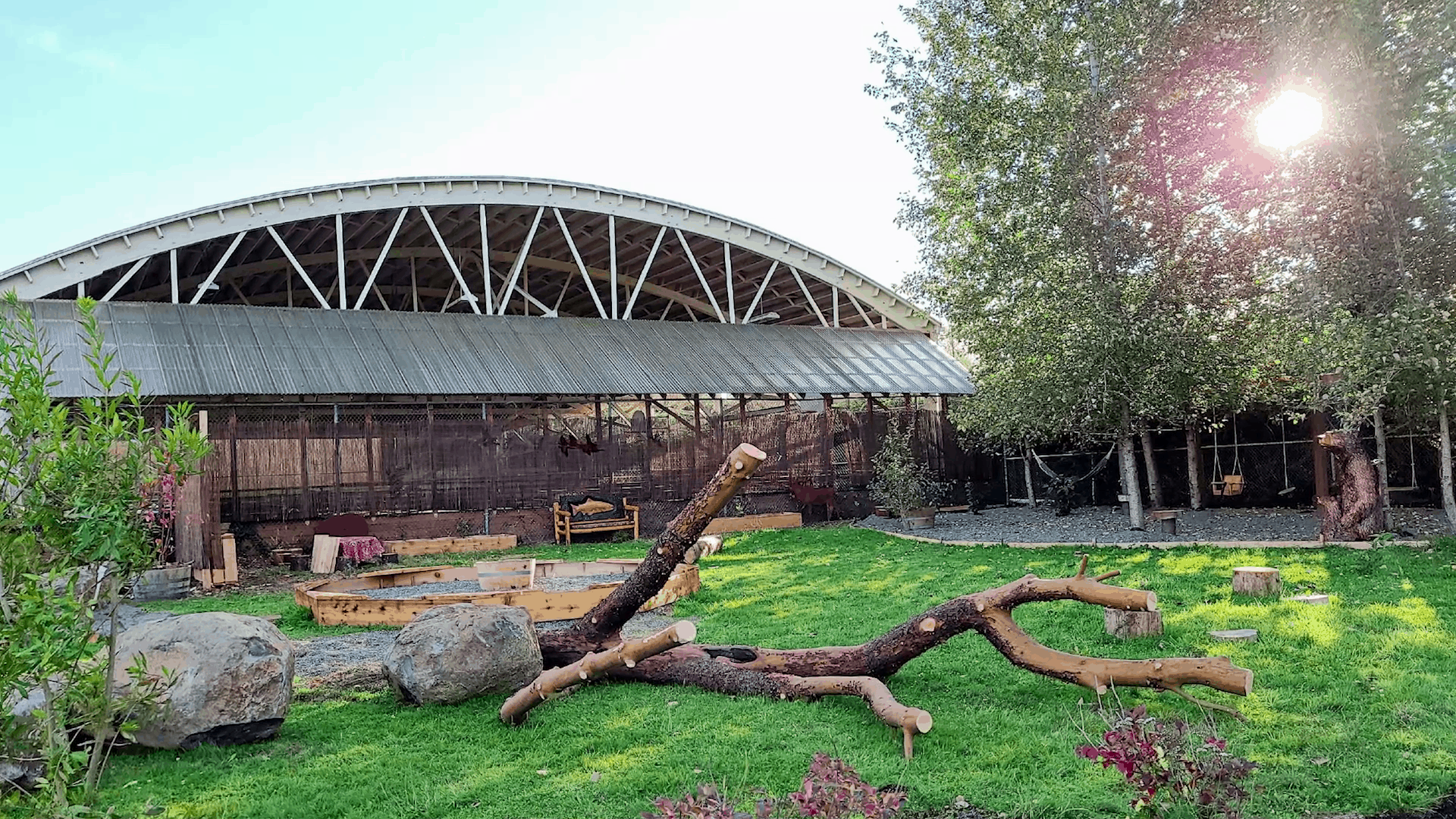 The most recent addition to the campus at the Native American Youth and Family Center (NAYA) is an outdoor learning landscape called Chaku-Hayash Khapa Q’at Pi T’wax, a name in the Chinook language that translates to English as “Where We Grow in Love and Light.”

I visited recently on a warm Friday afternoon with the sun pouring through the indigenous Cottonwood trees and many people gathering in the shade. The learning landscape currently takes up a small portion of the campus at NAYA, an area approximately 100 x 100 feet. The rest of the NAYA campus takes up 10 acres in total and stretches from NE Columbia Boulevard in Portland all the way down to the Columbia Slough. About five acres are reserved for outdoor activities including community events, powwows, family exercise groups, and gardening. It also serves as a place for wildlife to thrive.

“When we purchased the land in 2007, it was a way of reclaiming it for Native purposes,” said Paul Lumley, NAYA’s executive director. “We surveyed the community and people wanted to use the land to express themselves culturally.” 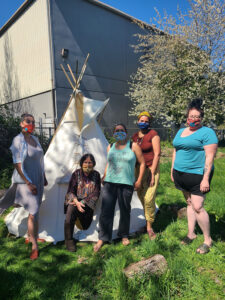 The idea to use a portion of the land for the learning landscape started more recently and grew from the desire to create a community gathering space designed for everyone, from young children to elders in the NAYA community.

Mick Rose, the culture, education, and wellness manager at NAYA described the effort as one that is building and strengthening community. “It’s an act of living in abundance, it’s sacred work,” Rose said. “We are part of a community and we are creating it with and for each other.”

Lumley said that Rose carried the dream for the learning landscape and holds the vision for how the five acres will eventually be used. That includes a children’s plank house, walking paths, patios, and a network of gardens growing traditional foods such as the Three Sisters, the combination of corn, beans, and squash which, when eaten together, create complete proteins.

Rose said that the vision for the space doesn’t belong to one person, but rather belongs to the community. “We talked to the elders about it, and they really supported it. The community supported it. The work had really been planned for years, but people were afraid to take it on. The pandemic actually helped bring people together to get the work moving.”

Suzie Kuerschner from the Future Generations Collaborative (FGC) said the idea for the space started with a dream, and people are now making the dream come true. “We wanted to create a multigenerational place of nurture and exploration, a place where traditional knowledge could inform best practice and where cultural traditions are celebrated,” she said. FGC has been a long-time NAYA partner. The FGC Education Mode collaboratively designed and funded the project, which was, in turn, honored by the generosity of the hearts and hands of the people who embedded cultural values and reflected these elements through the carved, cedar canoe and traditional hammocks.

Lumley said that the space is more than a space for play, but a place kids and families can get in touch with the environment and the earth. “We often forget where food comes from. Here, people can learn how to grow their own food and do it themselves. Kids can learn that.”

The space also fosters the ability to explore and focus on historical resistance as opposed to historical trauma.

Monique Lopez, a community education worker at NAYA, said that understanding historical trauma is necessary, but focusing on historical strengths is more powerful. “I decided to stop generational trauma in my own life,” she said. “And this space is about empowering the next generation to find their traditional ways.”

Alberta Qamar, a parent-child support specialist at NAYA, described the importance of the concept of resistance in her Afro-Indigenous heritage. “Our ancestors fought and resisted, and they would have wanted this for us, wanted us to gather in this space, in this way, working to strengthen our culture and our families. NAYA helps create a space for that and has helped me reconnect with indigenous practices as part of my lineage.”

Rose added, “These kinds of spaces allow us to do that. They help so many to live a life of liberation.”

Inside the learning landscape, children can explore a multisensory environment. This teaches risk benefit instead of risk management, and that promotes internal control, self-governance and self-discipline.

Lumley said, “The environment itself is a manager of behavior, and it stimulates cognitive and motor development.”

“Indigenous people all over the world know the power of creating spaces like this,” Rose said. “Green spaces, places to explore, places to play. Kids need that. Adults need it, too.”

Kuerschner described Chaku-Hayash Khapa Q’at Pi T’wax as a project that tells a story of people and place. “It creates positive community momentum and pride,” she said. In many ways, the space is about creating and sustaining connections: keeping indigenous people connected to the environment and nature, keeping children, adults, and elders connected to each other and their heritage, and strengthening the relationship between indigenous traditions and learning.

On the day I visited, Lukas Angus was continuing the work of carving a canoe for the space, one that would work on the water if desired but would also be for children to play with and learn from. “A canoe this size was used historically to gather food. This one uses a Nez Perce shape and design,” Angus said. “This dugout style canoe was not especially elegant or seaworthy, but was used to harvest Wapato roots in the Columbia Slough.” Today, Wapato remains threatened by pollution and no longer grows in the Slough near the NAYA campus, but Angus would like to help it return.

“We learn from the land, we learn from the elders and from multiple generations,” Kuerschner said. “When we started work on the space, someone suggested we take the Cottonwood trees down to create room.” Laughing, she continued, “I said we can’t do that, they’re indigenous just like we are.”

Qamar’s son played in the gravel and built what looked like a small city with shells and stones. At one point he moved to the canoe, playing with the fresh shavings from Angus’s work. Her younger son slept in the hammock in the shade of the Cottonwood trees. Eyes closed, dreaming perhaps, he unknowingly represented the first generation to grow in this new space in love and light.